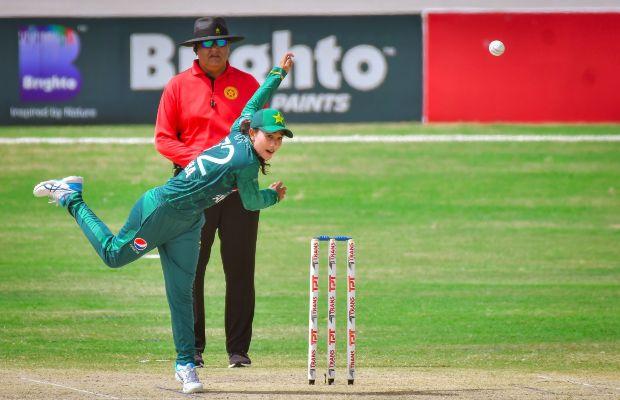 Tuba Hassan became the first Pakistani cricketer to take three wickets on her Debut in the Women’s T20I against Sri Lanka.

Her bowling figure 4-1-8-3 is the best by any Pakistani debutant in WT20Is.

Spinning a web over the 🇱🇰 batters 🕸️

The 21-year-old leg-spinner, Tuba Hassan has also become the first Pakistani to earn the player of the match award on her international debut.

What a debut for Tuba Hassan 🌟 pic.twitter.com/OdSS5xpWgT

In the first T 20,  Pakistan women’s cricket team beat the Srilankan team by 6 wickets.
Nida Dar scored 37 runs for not out.

Sri Lanka won the toss and elected to bat at Southend Stadium Karachi.
Tuba Hassan and Anam Amin pick three wickets each to restrict Sri Lanka to 106/8.
Gull Feroza and Tuba Hassan both made their T20I debuts against Sri Lanka.

The Twitter timeline is flooded with praises for the young star Tuba on her remarkable debut.

– The Lahore-born leg-spinner, Tuba Hassan, registered the best figures on T20I debut for a Pakistan bowler with figures of 4-1-8-3. https://t.co/VDaoPjf0J9

Impressive debut from Tuba Hassan, looks like Pakistan Women has got a very good talent for the future.

An outstanding spell by Tuba Hassan on her international debut! 🙌

And she is the player of the match. What a dream debut for Tuba Hassan. A match-winning leggie, hopefully Pak cricket can look after her & she keeps improving. Great signs for the future pic.twitter.com/3JcdEAPQ1G

Amazing debut for Tuba Hassan with 3 wickets from her 4 overs, conceding just 8 runs (there's a maiden in there as well). Looking forward to seeing her career develop and flourish 👏👏👏 pic.twitter.com/Bq3mEEFWNU