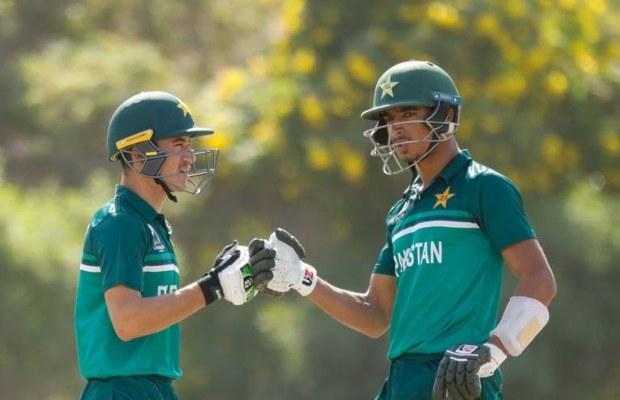 Pakistan under 19 team defeated India under 19 by two wickets in the group stage match of ACC U19 Asia Cup 2021 played at the ICC Academy Ground No 2, Dubai on Saturday.

Skipper Qasim Akram after winning the toss put India to bat and managed to restrict the Indian side to 237 in the 50-over match.

Zameer took an amazing five-wicket haul in 10 overs, followed by Awais Ali, who picked up two wickets, while Maaz Sadaqat and Akram were able to take a scalp each.

Pakistan slipped to 69/3. Skipper Qasim Akram (22) also fell cheaply at that it felt as Pakistan was in a spot of bother at 115/4, even as Shehzad continued to tear apart the opposition attack.

Shehzad was run out in the 37th over that brought India back into the contention as Pakistan lost half its side for 159.

However, Irfan Khan (32) and Rizwan Mehmood (29) took the game deep by adding 47 runs for the sixth wicket.

Irfan Khan scored 33 runs off 50 balls before he was sent back to the pavilion.

Then, Bawa pegged back Pakistan by removing Mehmood and Irfan Khan, but a composed Ahmad Khan, who hammered three boundaries and a six, completed the job for the green team.

tweet
Share on FacebookShare on TwitterShare on PinterestShare on Reddit
Saman SiddiquiDecember 25, 2021
the authorSaman Siddiqui
Saman Siddiqui, A freelance journalist with a Master’s Degree in Mass Communication and MS in Peace and Conflict Studies. Associated with the media industry since 2006. Experience in various capacities including Program Host, Researcher, News Producer, Documentary Making, Voice Over, Content Writing Copy Editing, and Blogging, and currently associated with OyeYeah since 2018, working as an Editor.
All posts bySaman Siddiqui