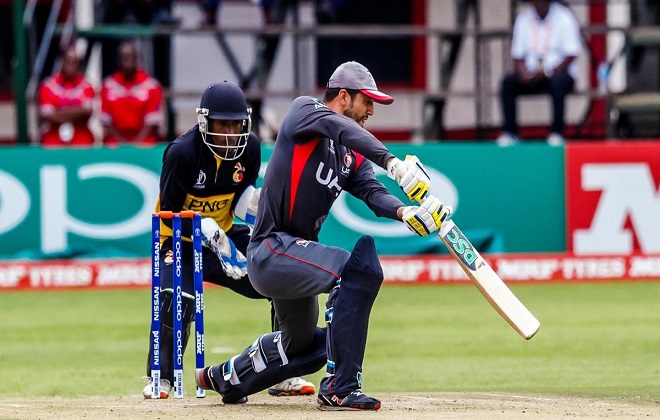 UAE players lashed out at PCB for poor ground facilities for their match against Hong Kong, after a washout meant exit for UAE from the emerging cup. The players tweeted against the PCB and how angry they were after the washout. Later those tweets were deleted.

Bowling 1st UAE had a made a decent start restricting Hong Kong for 87-4 in 31 overs. However, a quick shower stopped play for around 30 minutes. The ground staff tried their best to cover the pitch but the facilities were clearly inadequate. They did not have tarpaulin covers which are required to cover the pitch and the square. Water seeped through and it resulted in the matching being called off.

UAE captain Rohan Mustafa took no prisoners and tweeted “Might the organiser don’t know the pain of when you get out of the tournament like that .. i am really sorry to say but we are out because of poor facility at the ground”

While Ahmed Raza was no less annoyed: “We @EmiratesCricket sat in the Sun for more than 4 hours waiting for the pitch to get dry because of the club level covers at the so called “Test” venue @therealPCB. 20 mins of rain ruined our chances of going through to the semi final #unfair #noreserveday #poorfacility”

UAE middle-order batsman, Rameez Shahzad, took a step further, taking a greater perspective: “Never mind the security but there are more reasons to why international cricket has overlooked this part of the world when it comes to international cricket .. @ICC @icc_assoicates such a shame honestly #embarassing the way @therealPCB have dealt with it.”

The Southend Stadium doesn’t have 1st class status and used by private companies and individuals largely. Officials had time to prepare as the MET department had predicted rain on Sunday. However, since Karachi rain fall is extremely limited and usually unpredictable, such a small burst with heavy rain must have took the official by surprise.

The result in the end was inconsequential as Bangladesh beat Pakistan and that meant UAE would have been out of the tournament even with a win.