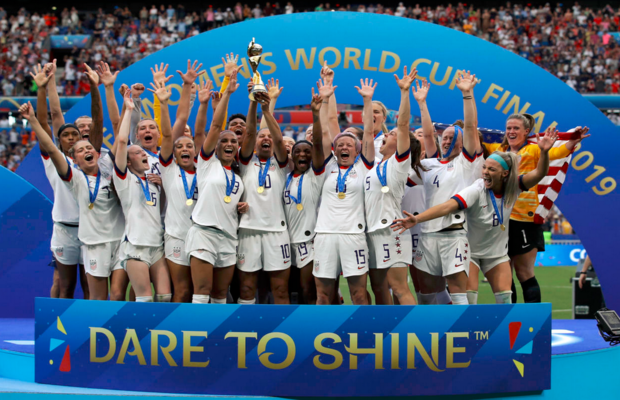 The United States Women’s National team has won the world cup 2019, after beating the Netherlands 2-0 in Sunday’s final.

The USWNT has hoisted the trophy for the second consecutive tournament.

Throughout the tournament, the top-ranked U.S. women had taken a lead going into halftime of every match they played.

They had never been held scoreless in the first half. In the finals against the Netherlands, it took an hour of game time before Rapinoe broke the scoreless tie for the U.S. on a penalty kick.

At the 60th minute, a yellow card was awarded to Stefanie van der Gragt for a reckless challenge. After an initial non-call, video replay was checked. After review, the referee awarded a penalty.

At the 61st minute of the game, Megan Rapinoe converted the penalty kick to give the U.S. the lead 1-0. It was her sixth goal, which has put Rapinoe in a three-way tie for the Golden Boot award.

At the 69th minute, the USA scored the second goal taking the score to a decisive 2-0 victory over the Netherlands.

Midfielder Rose Lavelle drove down half the field, dodging between defenders and took her shot at the top of the box. It was Lavelle’s second goal of the tournament.

🤩 A goal worthy of #LaGrandeFinale

Having more trophies than hands is for sure a good problem. 🤷‍♀️#USA #FIFAWWC pic.twitter.com/MshGogK4LP

tweet
Share on FacebookShare on TwitterShare on PinterestShare on Reddit
Saman SiddiquiJuly 8, 2019
the authorSaman Siddiqui
Saman Siddiqui, A freelance journalist with a Master’s Degree in Mass Communication and MS in Peace and Conflict Studies. Associated with the media industry since 2006. Experience in various capacities including Program Host, Researcher, News Producer, Documentary Making, Voice Over, Content Writing Copy Editing, and Blogging, and currently associated with OyeYeah since 2018, working as an Editor.
All posts bySaman Siddiqui