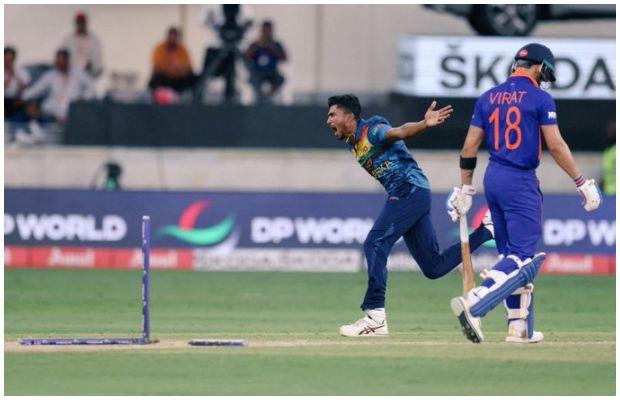 Put in to bat first, India had the worst start possible, losing quick two wickets with just 13 on the scoreboard.

Kohli, who had earlier showcased his best form during the clash against arch-rivals Pakistan with his knock of 60 runs off 44 balls.

However, Kohli, 33, completely failed to judge Madhushanka’s delivery and lost his stumps while attempting a cross batted stroke of a good length delivery, which moved slightly after pitching.

Here is how Twitter reacts to his early dismissal:

I will remember this for the rest of my days 😭 #SLvIND #AsiaCup2022 pic.twitter.com/mhmm7rcyds

-Being a fan of Virat Kohli is not easy Job, It's really a tough Job. You have to face Unexpected disappointments. And can't overcome your emotions if you are a real fan.
Good luck King For the Next. #ViratKohli𓃵 #AsiaCup2022 #CricketTwitter #cricketlovers pic.twitter.com/KbYrmrppAn

Just a bad day!💔 It's hurting but it's okay King, heads up. Will settle this on next match!✊🏻 Love You Always!👑 @imVkohli pic.twitter.com/yw8ZaGLSM5

Good news for ICTains
Virat kohli and Rohit sharma are back in form pic.twitter.com/zdM2XVIazM

One bad game after back to back fifties. Come back stronger Champ @imVkohli pic.twitter.com/gVcMwIDtrR