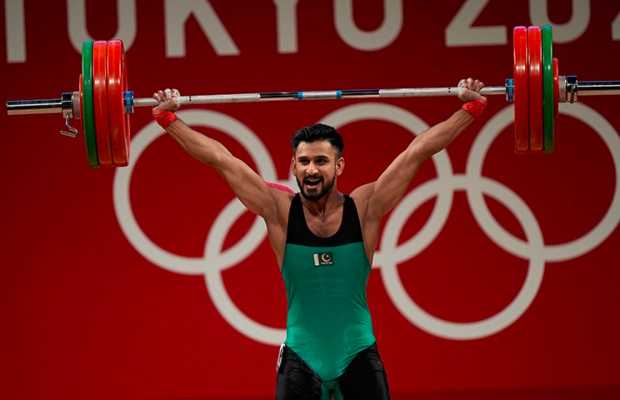 Pakistan celebrates the birth of a hero after Weightlifter Talha Talib misses out on Olympic gold!

The 21-year-old lifter hailing from Gujranwala, made his Olympics debut on Saturday taking part in the 67kg category.

The young weightlifter held the gold medal spot until the final round however he finished on the fifth spot as China’s Lijun Chen, Colombia’ Luis Javier Mosquera Lozano, and Italy’s Mirko Zani captured gold, silver, and bronze respectively. 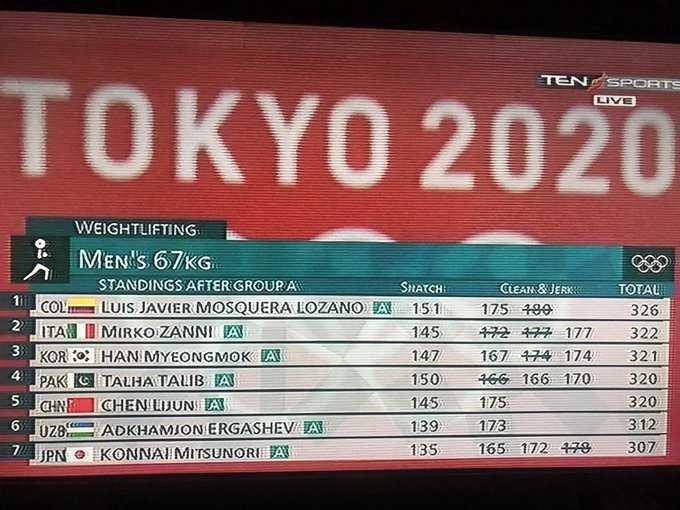 Talib’s lift of 151kg in the Snatch category was the second-best of the round.

But he failed in his first Clean & Jerk attempt of 166kg and even though he was successful for the same weight in his next attempt and also cleared 170kg.

But in the end, it wasn’t his lucky day as his combined total of 320 Kg was surpassed by others, including Italy’s Mirko Zani, who lifted just 2kg more than Talib.

Pakistanis on Twitter hail Talib’s performance despite an obvious lack of resources.

A boy from #Gujranwala Talha Talib making history in #Tokyo2020 with no basic facilities, practiced in local gyms, no world class level professional training – I am not crying you are!!! #Weightlifting pic.twitter.com/0IHDC5GhVO

Pakistan cricket team allrounder Shadab Khan in a tweet said: “Pakistan is proud of Talha Talib. Urge sponsors and sports administration to help athletes like Talha, they have the potential to bring home Olympic medals and make Pakistan proud if given the facilities and financial support.”

Pakistan is proud of Talha Talib. Urge sponsors and sports administration to help athletes like Talha, they have the potential to bring home Olympic medals and make Pakistan proud if given the facilities and financial support. #SupportAthletes #OlympicGames pic.twitter.com/Hp4TryjwPC

Cricketer Javeria Khan in a tweet said: “Win or lose, you have already made Pakistan proud. Talha Talib“

Win or lose, you have already made Pakistan proud.

Messages continue to pour in social media praising Talha Talib for all the efforts he has put in despite a lack of professional training.

Talib’s entry into Tokyo Olympics was made possible after the International Olympic Committee accepted a request from the Pakistan Olympic Association (POA) and offered the young lifter an invitation place in -67kgs category.

Just a reminder: PSB didn’t organise any single camp for weightlifters in last three years. Talha wasn’t provided any special training program even after his qualification. He is in #Tokyo2020 without a coach as president of PWF had appointed himself as an official with athlete. https://t.co/FFvOYqIFif

BTW Talha Talib is the first Pakistani weightlifter to make the cut for the Olympics since 1976 🤯🤯🤯. Pakistan should be proud of him.

So proud of our Olympian Talha Talib. More power to you, Pakistan is rooting for you#Weightlifting pic.twitter.com/XTMY6eHqxJ

Great effort by #TalhaTalib 👏🏼
It shows that if we invest more time and money into our athletes, they can do wonders! 🇵🇰 #olympics2021 pic.twitter.com/rgYIeYaAG7

Hats off to #TalhaTalib!! Welldone Talha for making the whole country proud of you. Remarkable achievement despite challenges, lack of facilities and support.
Pakistan Sports Board needs to wake up. Major improvements needed. #SupportPakistanTalent #Olympics pic.twitter.com/z11bqL1hZK

You’ve made us all very very proud! #TalhaTalib 🙌🏼🇵🇰 pic.twitter.com/nblmscSCsj