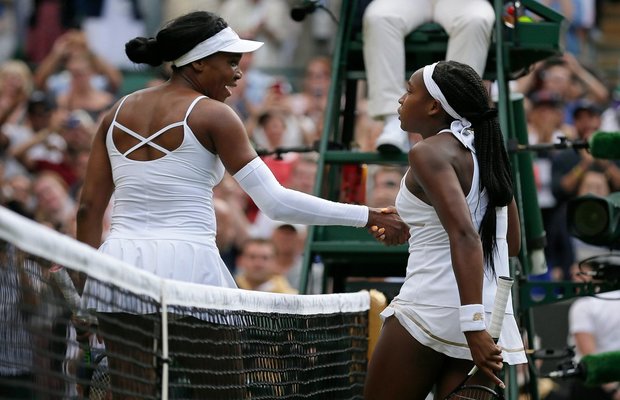 15-year-old American, Cori Gauff, has caused one of the biggest shocks in Wimbledon’s history by thrashing Venus Williams in the first round, on Monday.

That’s a perfect excuse for a 15-year-old student for playing hooky from school, sending shock waves to the tennis world, with a show stopping 6-4 6-4 display, that’s how a star is born.

15 yo Cori Gauff takes down Venus Williams in the first round. Youngest winner since 1991.
Fearless. pic.twitter.com/CJjwcvNWuh

Gauff announced her arrival to the tennis world with a stunning victory over seven-time Grand Slam champion Venus Williams, who is 24 years older and had won two of her five Wimbledon titles before Gauff was born in 2004.

The 39-year-old Williams is considered Wimbledon royalty as she has been part of the All England Club family for over two decades.

“I am literally living my dream right now”, said 15-year-old after beating her idol, Venus Williams. Gauff’s story is almost too good to be true: a teenager beating her hero in her grand slam debut.

“I don’t even know how to explain how I feel”, said Gauff, moments after her remarkable win had condemned Williams to only her third opening round defeat at Wimbledon in 22 appearances.

“I definitely had to tell myself to stay calm, I have never played on a court so big, but I had to remind myself that the lines on the court are the same size.

Everything around it might be bigger, but the lines are the same and after every point, I was just telling myself to stay calm”.
“I never thought this would happen, I am literally living my dream right now, and not many get to say that.

So I am just happy that Wimbledon gave me the opportunity to play and I obviously never thought it would be this far,” added Gauff

Cori Gauff became the youngest player ever to qualify for the main draw at Wimbledon. Her current 301st WTA singles ranking has climbed sharply from 874 eight months ago.

She appeared on Wimbledon’s grass courts in the junior tournament last year, making it to the quarterfinals.

tweet
Share on FacebookShare on TwitterShare on PinterestShare on Reddit
Saman SiddiquiJuly 3, 2019
the authorSaman Siddiqui
Saman Siddiqui, A freelance journalist with a Master’s Degree in Mass Communication and MS in Peace and Conflict Studies. Associated with the media industry since 2006. Experience in various capacities including Program Host, Researcher, News Producer, Documentary Making, Voice Over, Content Writing Copy Editing, and Blogging, and currently associated with OyeYeah since 2018, working as an Editor.
All posts bySaman Siddiqui