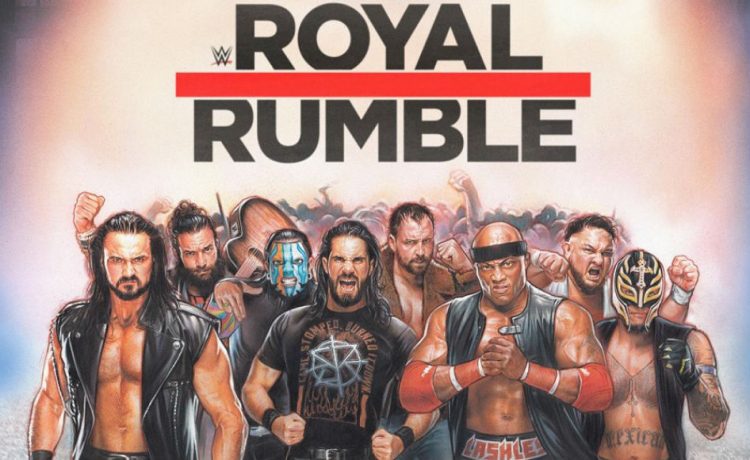 Starting off with the kick of match we got 3 matches. FIRST….

I don’t even know that there is a match for the RAW Tag Team Championship. This match was ABSOLUTELY USELESS  in the kick off, though a good effort.

This match was all setup for Becky Lynch to be an entrant in the Women Royal Rumble Match.  Nakamura goes to cheat, Lana calls him out, and then Rusev accidentally pushes Lana off the rope.  Knee for Rusev and here you have New United States Champion “NAKAMERICA”.

I’m satisfied  with the match overall. Every competitor got the time to shine in the ring. Buddy Murphy is great and has a real presence. Never underestimate the Cruiserweights, they always deliver. Ultimately, though Buddy started spamming knees Kento Miyahara style and then put down Itami with his great looking finisher.

A fantastic opener for the pay-per-view proper.  Becky and Asuka were good in the ring. The match was slow at the start, but after a few moments they started to build up the match with amazing submission reversals and steeling finishers. Well, this match was good to watch and Becky surely wasn’t ready for ASUKAAAAA.

The Match was like full of botches you know. I hope Shane McMahon jumps off the giant lighting rig they have set up over the ring. So the cringe team won the match. Shane O’Mac did shooting star on Cesaro and pinned him. THAT ALL FOLKS ..

I really enjoyed this match. Never thought that Sasha will equally match Ronda in the ring. The crowd seemed dead throughout, even at the end. I liked the story they told, with Sasha being able to match Ronda for submissions, but Rousey finally using her power to overcome Sasha in the end. Not a MOTY contender, but still a good match all in all.

We can’t have Becky everywhere, can we?

So started with Lacey Evens and Nataliya. No reaction from the crowd at all. Ember Moon entered and they cut to a huge CGI moon for some reason.The action picked up a bit quality wise when Charlotte Flair entered like WOOOOO!! Then the match patched up a little bit Kacy Catanzaro of Ninja Warrior fame is in this too. #20 is Zelina Vega and this match has not improved. Kacy, who has been training for like a year now, has been the most impressive woman in this match so far. Ruby Riott entered the rumble with her girls, Liv Morgan and Sarah Logan. The plan was smart they drag the one woman outside the ring beat her up, then throw her back in the ring for Ruby to eliminate but Ruby’s dream shattered when IO Shirai entered. She did a moonsult on the Riott Squad which I think Eliminates her but hey nobody is following the rules. Rhea Ripley is #24 and she has the best entrance music of the entire women’s division. The match picked up a bit with Alexa Bliss’ entrance followed by Bayley. Then Nia Jax entered but HELL NO REACTION A COMPLETE SILENCE. Carmella Entered at #30 because she and R-Truth won the mixed match challenge. Oh, I forget to mention Lana’s entrance. Her music hit and she showed up with a broken ankle. She was pushing herself towards the ring but the pain didn’t let her to (SETUP ALERT). So, after Carmella entered crowd was hyped and chants for Becky –Becky finally showed up and asking Fin Finley to let her get the spot of Lana. He allowed and the crowd was pumped up. The first face off Becky was with Nia Jax. Cause back then she broke her nose a single BLOW.  Becky gets her revenge by eliminating Jax, but quickly after, Jax pushes her off the ring steps, hurting Lynch’s knee. Now Becky has one more odd to overcome in this battle of the final two with Charlotte. The final stretch was good this is the moment where Becky was looking AWESOME. Becky’s victory was pretty much perfect. As good as the finish was though, this wasn’t a very good Rumble.

I was expecting some good match from both but it was bad like real BAD. This match was slow, boring and perfunctory. Out of the blue why the heck Eric Rowan showed up in the match to facepalm chokeslam to AJ and allow THE NEW DANIEL BRYAN to win.

David and Goliath they said. It is exactly what it has to be. The fast paced match where Finn is going to beat the hell out of Brock. Quick, violent, and realistic affair. Brock Lesnar sold like a champ and Finn was super believable as somebody who could win.  Here there wasn’t a second wasted. It was everything that it needed to be. It wasn’t like the old times F5 pin this time it was Kimura. Finn had answers for everything Brock was trying to do and even had a beautiful counter to the F5.  But in the end one small lapse allowed Brock to lock in the Kimura and tap him out.

So, the time has come for the 30 Men Royal Rumble.

ZERO Surprises in the Rumble this year. The only best part in the Rumble was when Seth was in the ring Dean enters. That was a good thing to see what we expected back when Rollins defend the Intercontinental Championship.. So, this was the big comeuppance moment for Jax but the crowd didn’t care. Andrade, Ali, and other of the next generation of stars were good in the ring I mean they were really good. Johnny Gargano is the first NXT entrant. Jinder was eliminated by Johnny. Mustafa Ali enters at 13, thus killing my theory of his dark horse victory. The next big entrance is Pete Dunne and it’s super cool to get to see him in there with Samoa Joe. Aleister Black is the next NXT entrant. Black did score a pretty big elimination though by tossing out Ambrose. Ali followed that up by eliminating Samoa Joe. Maybe he’ll make it through after all. Golden Crisp.  Nia Jax is entering the Rumble? The Saudi overlords must have convinced them to do intergender again. Rollins wins by curb stomping Braun on the ring apron. It was probably a good finish.

Finally the show ended.  It was a LOOONNG SHOW. 5 Hours plus of nonsense. Overall the show wasn’t good at all and the victories were way long predicted. Vince you can do better or else AEW will take over.