The Man is taking Over The SDLive…. 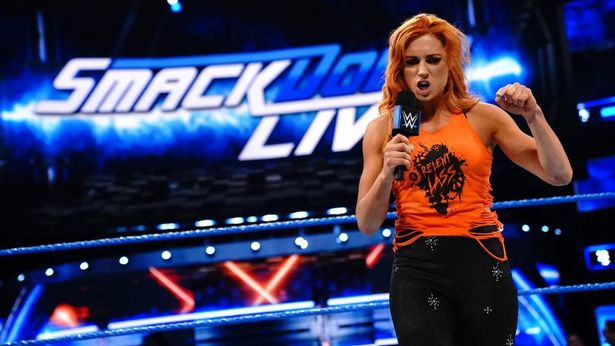 Kick off the show of SDLive with The Man as she drives in.  She wastes no time and heads to the ring.  She Said in 2 weeks she will get back for what she is fighting for months.

Lynch says that the whole roster thinks what she is doing is a fluke, that being The Man is easy until they try it. She included Asuka is now finding out just how hard leading this division really is. As they were cutting the promo they were interrupted by the Iconic Duo. They starts to mention that Champion should not make wired faces and Becky is bossy just like a typical MAN.

They ignored both of them and stated they try and become the first ever Women Tag Team Champion.

Becky turned her attention to Asuka and said why she is the talk of the industry. She challenges either Peyton Royce or Billie Key to a match.

The Match was good showing how much Becky improved her wrestling. The match was more tilted towards Becky’s side from the start in the end with a backsploder and locked Royce in Dis-Arm-Her to pick up the victory.

Following the win, Asuka begins screaming at Lynch in Japanese and it is clear she challenges Billie Kay to a match.

Asuka wastes little time taking the fight straight to Kay, kicking and hitting a hip attack locking her into her version of Becky’s submission.  Asuka smartly reverses into the Asuka Lock for the win and Asuka and Lynch have a big stare down.

Aj Styles Music hits the arena . AJ Styles is now at the concessions stand just like Bryan was last week with the WWE Universe. he promises to kick Bryan’s ass at the Royal Rumble. AJ hands out shirts to his fans but then out of nowhere Daniel Bryan appears and ambushes Styles and the two men quickly begin brawling which leads to AJ planting Bryan through a table full of hot dogs until security drags them apart.

Whilst Mustafa Ali is getting onto the top rope to pose for his fans, Samoa Joe brutally attacks the former 205 Live star, Despite being dragged away by WWE officials, Joe returns to continue the beat down, laying in shots and headbutts before destroying him against the next ring post in a brutal looking bump.

This match got a lot of appreciation last week in SDlive so they booked them this week too. The chemistry between them was flawless. Both men start the match feeling each other out with an electric pace being kept as each man attempts to get the upper hand in the early moments. The match was extremely good to digest. In the end Andrade catches Rey on the top turnbuckle and plants him with a Hammerlock DDT to pick up the win. WOW! What a brilliant TV match, that one is a must watch.

The Miz is here to provide his tag team partner the best “Birthday Bash” in the world.  This was a sweet segment between the WORLD BEST TAG TEAM. The Miz then gets the entire crowd singing along for a happy birthday chant, which is, of course, spoiled by the Tag Team Champions; The Bar. Shane suggests The Miz and Sheamus should have a match which Miz doesn’t want because he is dressed in a suit, but instead Shane puts over Miz’s accolades and says it is his birthday wish so… we have our main event.

THE MIZ vs SHEAMUS

The match was OK. Miz win by the rollup pin Afterwards, Sheamus attempts to attack Miz again, but Shane and his partner work together to deal with the situation.