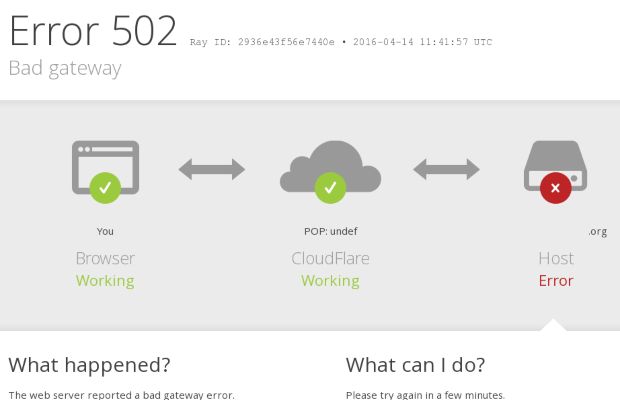 As reported, Cloudflare — a DNS service — experienced a global outage on Tuesday.

Large chunks of the internet are returning an nginx 500 Internal Server Error right now (I'm assuming something's messed up at Cloudflare or similar) but this is definitely my favourite pic.twitter.com/cK5x49ZLiR

Shortly after the problem was reported, Cloudflare confirmed the outage in a statement released on its Twitter handle.

“The Cloudflare team is aware of the current service issues and is working to resolve them as quickly as possible,” it said, adding, “the issue has been identified and a fix is being implemented.”

“A critical P0 incident was declared at approximately 06:34 AM UTC (11:57 am PST). Connectivity in Cloudflare’s network has been disrupted in broad regions,” the statement added.

“The incident impacted all data plane services in our network,” it added.

The company assured that a fix has been implemented; however, “we are monitoring the results.”

The issue has been identified and a fix is being implemented.

It is worth mentioning that Cloudflare is the most popular content delivery network by some margin.

tweet
Share on FacebookShare on TwitterShare on PinterestShare on Reddit
Saman SiddiquiJune 21, 2022
the authorSaman Siddiqui
Saman Siddiqui, A freelance journalist with a Master’s Degree in Mass Communication and MS in Peace and Conflict Studies. Associated with the media industry since 2006. Experience in various capacities including Program Host, Researcher, News Producer, Documentary Making, Voice Over, Content Writing Copy Editing, and Blogging, and currently associated with OyeYeah since 2018, working as an Editor.
All posts bySaman Siddiqui