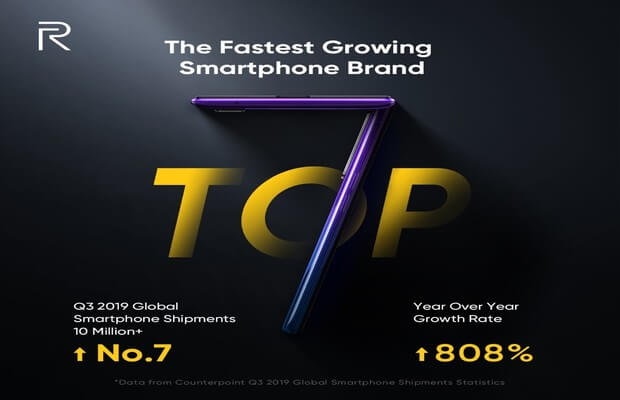 Smartphone brand realme announces that realme ranks the 7th according to the statistics of global smartphone shipments of realme in Q3 of 2019 from Counterpoint. It is the first time that realme becomes top 7 mobile phone brands after being the top 10 in Q2 of 2019. More importantly, the total shipments of Q3 are more than 10 million and the year over year growth of realme reaches 808% which ranks 1st among the world making it the fastest-growing smartphone brand.

It is because of the “Dare to Leap” brand concept which realme has always insisted that realme accomplishes such surprising results as an 18-month-established young brand when the global smartphone shipments are constantly decreasing, additionally, the “Dare to Leap” strength of realme products also plays an important role.

In October 2019, realme announces that its global users have exceeded 17 million and officially become the mainstream global mobile phone brand. At present, the whole product portfolio of realme has entered the European market as the flagship product is introduced in the overseas high-end market which is the goal of realme’s globalization strategy. At this point, realme has entered over 20 markets including China, Southeast Asia, Russia, India, Europe and so on, meanwhile, it has made great results in many new large-scale markets.

Plan on The Complete Product Portfolio
The “Dare to Leap” brand concept and the whole outstanding products have played a significant part in realme doing such a brilliant job during a short period of time. realme officially makes the whole product portfolio covering entry-level products to the flagship in the whole global markets after launching realme X2 Pro and brings surprising “Dare to Leap” products to customers at every price. 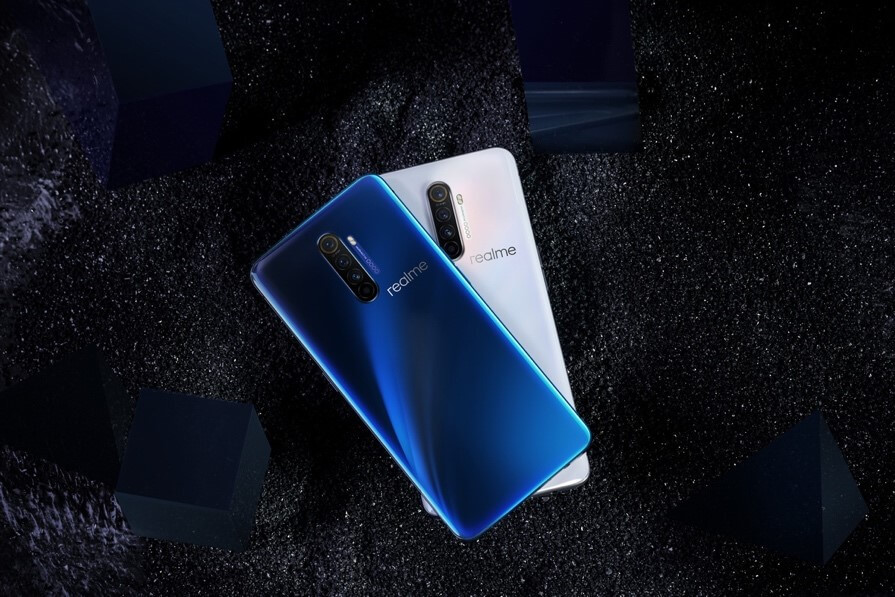 At the same time, as a new brand, the young realme invites the global industrial design giant Naoto Fukasawa to become the Invited Design Director of realme. realme and Naoto have corporate with each other to bring many realme Master Edition products to inspire smartphone industrial design and the Master Edition has made great reputation among customers who have more demands.

Fully Plan on leading 5G
Earlier in September this year, Qualcomm Corporation officially launched Snapdragon 7 Series 5G mobile platform, realme announced that it would become one of the terminal manufacturers which are going to be shipped with Qualcomm integrated 5G mobile platform firstly. The whole new Snapdragon 7 Series 5G mobile platform will make new realme products more powerful and bring better experiences to users. Besides, realme also makes a great effort in the IoT field, it tries to research Wearable devices, AR/VR, Cloud Game, Internet of things and other aspects and explores new products from the IoT angle of the whole 5G Ecology to find more application scenarios.

realme devotes itself to enhancing the speed of 5G’s globalized dissemination and utilize the whole global markets to bring the improved 5G exploring experiences and terminal products to new markets and help with the local manufacturers 5G testing infrastructure to establish 5G internet and step into 5G age more quickly.

realme has landed a record of “The World’s Fastest Mobile Phone Brand Becoming Top 10”, now it becomes the world’s fastest-growing smartphone brand ranking the 7th which shows the magnificent strength of the brand. The “Dare to Leap” brand concept and products are the spirit of realme. Hopefully, realme will bring us more miracles in the future.

realme’s upward trajectory in Pakistan has been phenomenal since the brand’s entry last year, realme has been aggressive in its approach, launching a successful budget to mid-range smartphones with an attractive spec sheet and affordable pricing. realme has made a name for itself by selling smartphones with powerful hardware at prices aggressive enough to go up against its competitors. Pakistani youth’s favored smartphone brand realme has quickly snatched market share from existing players and is fast becoming one of the most sought after brands.

Since its entry into the Pakistani market less than 11 months ago, realme powered by Oppo, has already launched 8 products across different price segments from premium flagships to trendy mid-rangers, all designed particularly for the youth. They are also gearing up for the launch of their latest additions in the classic realme series in the coming months. realme is proving it has planned an even steeper growth trajectory than its parent company through a targeted focus on the youth.

tweet
Share on FacebookShare on TwitterShare on PinterestShare on Reddit
Saman SiddiquiDecember 11, 2019
the authorSaman Siddiqui
Saman Siddiqui, A freelance journalist with a Master’s Degree in Mass Communication and MS in Peace and Conflict Studies. Associated with the media industry since 2006. Experience in various capacities including Program Host, Researcher, News Producer, Documentary Making, Voice Over, Content Writing Copy Editing, and Blogging, and currently associated with OyeYeah since 2018, working as an Editor.
All posts bySaman Siddiqui