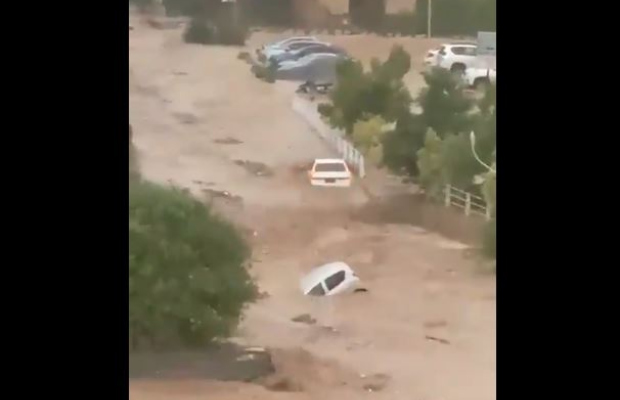 Heavy rains in Islamabad and Rawalpindi have wreaked havoc on Wednesday morning.

The cloudburst triggered flash floods in several areas of the federal capital and and washed away cars.

A mother and her son were killed in a house in Islamabad’s sector E11/2.

As being rpeorted the flood water had entered the house’s basement at night which caused the death of the child, while the mother passed away later.

122-millimeter rain has been recorded in different parts of the twin cities while the water level has also risen in Nullah Lai.

As being reported,  contingents of the Pakistan Army have arrived at the rain-hit areas after the authorities issued an alert.

Water level has risen in #chenab. These pictures are of Kowbagh, District #Ramban.
Advisories have been issued by District Disaster Management Authorities, informing people to remain vigilant and not to venture near river banks.#jammu #kashmir #Kishtwar #cloudburst @chitraaum pic.twitter.com/tVy4llq2pu

While Deputy Commissioner Islamabad in a tweet said: ” Cloudburst in Islamabad has caused flooding in various areas. Teams are clearing nullahs/roads. Hopefully we will be able to clear everything in an hour. Everyone is requested to plz cooperate and restricted unnecessary movement for next 2 hours.”

Cloudburst in Islamabad has caused flooding in various areas. Teams are clearing nullahs/roads. Hopefully we will be able to clear everything in an hour. Everyone is requested to plz cooperate and restricted unnecessary movement for next 2 hours.

The deputy commissioner further said  that the spillways of Rawal Dam were being opened as he appealed to the public to stay away from the riverbanks of Korang and Soan rivers.