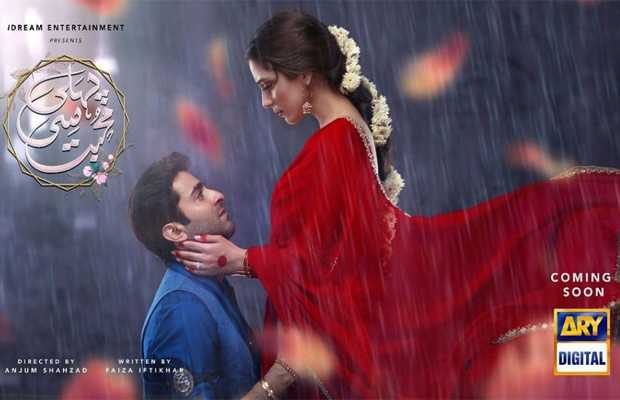 Pehli Si Muhabbat newly started drama serial airing at ARY Digital seems a beginning of a fascinating love story. The drama serial is written by the veteran writer Faiza Iftikhar of Ranjha Ranjha Kardi fame. This play is also marking the acting debut of Hassan Sheharyar Yasin and it also marks the comeback of Maya Ali and Sheharyar Munawar on TV screens.

The highlight of this play is the cracking chemistry of Sheharyar Munawar and Maya Ali, both are looking extremely good on screen. Although the story is not that powerful and at times it seems that there is an exaggeration at some points and things are getting quite over the top, however it is the fascinating love story and fervor of Aslam and Rakshi which makes this play a pleasant Watch.

Aslam and Rakshi are shown to be neighbors in Hyderabad. Aslam’s mother used to teach the neighbor kids Quran and Rakshi who happens to be their neighbor is also Aslam’s mother’s student. Rakshi’s mother died in her childhood. It is shown that Aslam and Rakshi like each other since their childhood. Aslam then goes to live in Karachi with his Nani for 6 to 7 years and now since he is being engaged to his cousin there, Aslam comes back to his home city.

Rakshi’s father marries a woman with a questionable background much younger than his age. However, that woman seems to be a good nature person who wants to get rid of her dark past and wants to live a respectable life with her husband. However, it seems so strange that Rakshi’s neighbors are creating problems for that woman. It is shown so over the top that they actually throw big stones at Rakshi’s house what for? Ridiculous If that woman has a bad past so what has to do with them? Rakshi’s father has legally married her, she is lawfully his wife so why they are creating problems for her? HSY portrayal as Akram is so brilliantly done as an extremist guy.

Aslam sees Rakshi in her house when he goes there to save her, and he falls in love with her at the first sight. Rakshi too lost her heart to him. Their fervor and young love look so cute where Aslam is following Rakshi all the time like a love struck the teen. Aslam’s brother Akram is getting harsher and harsher with Rakhsi’s father Faiz he asks his neighborhood to fully boycott them which once again seems quite exaggerated. Will Aslam ever be able to get Rakshi with having so many differences and issues going between their families?

tweet
Share on FacebookShare on TwitterShare on PinterestShare on Reddit
Rameeza NasimFebruary 4, 2021
the authorRameeza Nasim
Rameeza Nasim, a Paralian, passionate about poetry, drama and fiction. By giving drama critiques I feel like I am endorsing the writer's message to the audiences, I love my job. Being a critic responsibility lies on my shoulders to point out the flaws and shortcomings of the play be it on writer's , performers or director's end . I did my Masters in English Literature and Linguistics .
All posts byRameeza Nasim