Veteran film and TV star Rasheed Naz died on Monday morning at the age of 73, 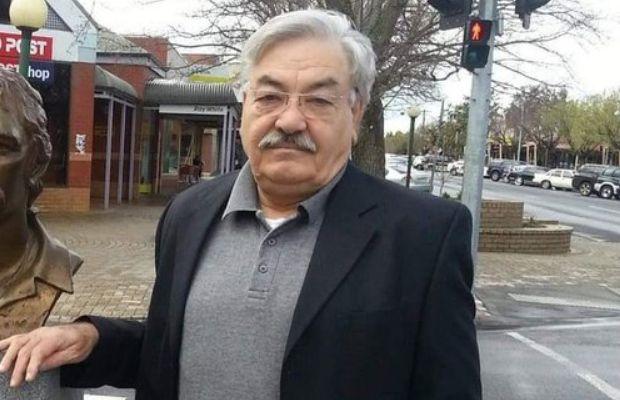 Veteran actor Rasheed Naz passed away on Monday after a brief illness, aged 73.

He has been an iconic actor from Peshawar who did not only work in regional language plays but also left a mark for staring in various Urdu productions including films.

Pakistani celebrities and fans took to social media to pay their tributes and mourned the great loss for Pakistan’s acting fraternity.

Paying tribute to the iconic actor, Adnan Siddiqui in a tweet said, “Another big jolt to our industry. Rasheed Naz Sahib leaves behind an impressive legacy of work. You will always be remembered as a brilliant actor. May Allah grant you the highest place in Jannah. Aameen.”

Another big jolt to our industry. Rasheed Naz Sahib leaves behind an impressive legacy of work. You will always be remembered as a brilliant actor. May Allah grant you highest place in Jannah. Aameen🙏🏽 pic.twitter.com/X7AtpzK0sE

Tagging his son and daughter-in-law, Simi in her post said, “deeply saddened today… #rasheednaz was a kind gentle larger than life human he was a powerful actor and he will be missed!! I remember all the times I worked with him…. Love and duas for the family!” 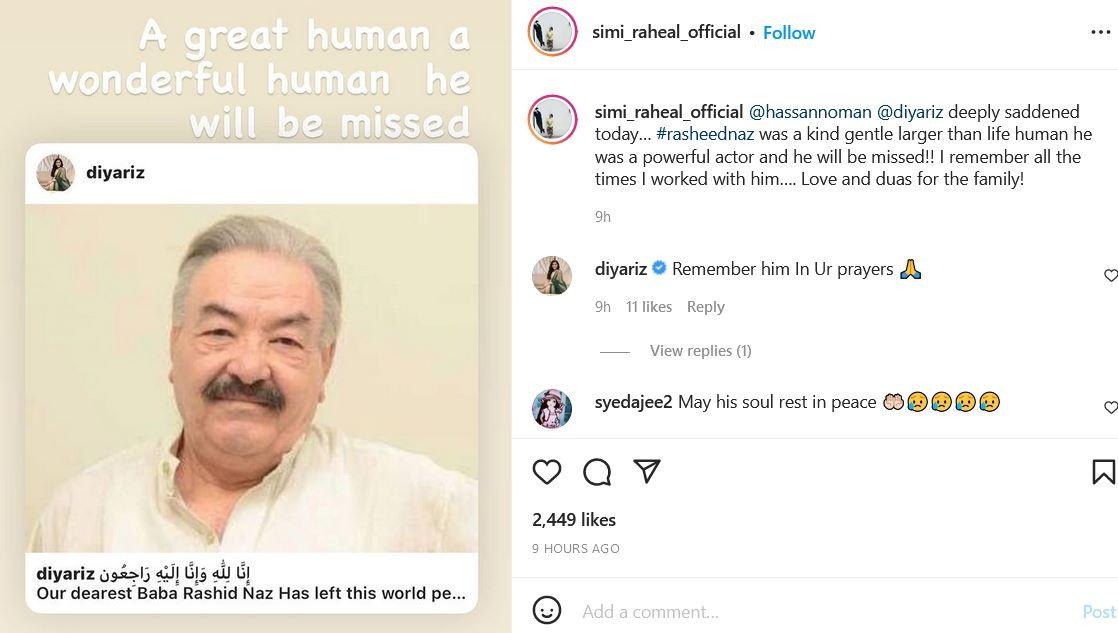 “Extremely sad to hear of Rasheed Naz Saabs passing. He was an incredible actor who embodied every role he took on flawlessly. Always smiling, always a source of positivity, he was a master at his art and it was a treat to watch him work. Above all, he was extremely kind, humble, and a caring human being. He was always patient with me, showed me immense respect even though I was a junior, and always gave me uplifting advice when I felt lost,” he wrote.

“The industry and Pakistan at a whole has lost another legend. I am fortunate enough to have had the honour to work alongside him. May Allah grant him the highest place in Jannah and give his family the strength to cope with this loss. Ameen,” Ali added.

He tweeted, “May Allah rest Rasheed Naz Sahab’s soul in peace and give his family and friends enough strength to cope with this loss. He was one of [the] remarkable Pashto, Hindko, and Urdu language actors of Pakistan. His work in Shoaib Mansoor’s Khuda Kay Liye was outstanding.”

May ALLAH rest Rasheed Naz sab's soul in peace & give his family & friends enough strength to cope with this loss. He was one of remarkable Pashto,Hindko & Urdu language actors of Pakistan. His work in Shoaib Mansoor's Khuda Kay Liye was outstanding. pic.twitter.com/BvFCuGGJRV

Tributes continue to pour in on social media:

Rest in love #RasheedNaz. I grew up watching your dramas and because of your appearance,
assumed you were a Hazara. One of our time's most versatile, smart, and mature actor. pic.twitter.com/y5DP4O6ZIH