Both have featured together in fashion campaign of famous Pakistani brand 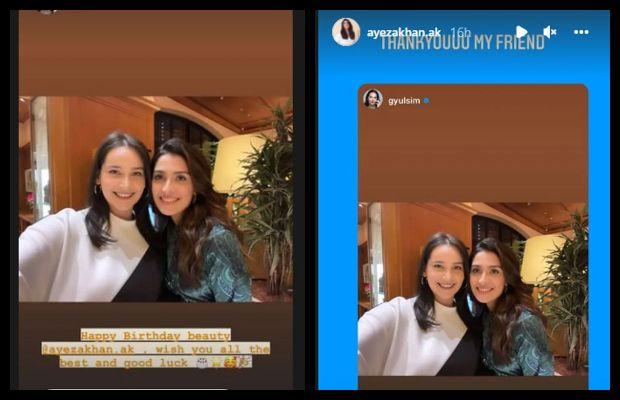 Which Dirilis: Ertugrul star has wished Ayeza Khan on her 31st birthday?

Pakistan’s popular actress and the most followed celebrity Ayeza Khan has turned 31 on Jan 16.

The actress has been reviving love and wishes on social media as she celebrated her birthday with her family.

It was the leading Turkish actor Gülsim Ali who showered love on Ayeza Khan.

Gulsim became popular in Pakistan ever since the Urdu dubbed version of the historical drama serial Dirilis: Ertugrul was aired on national TV.

Gülsim Ali portrays the role of Aslihan Hatun in Season 3 of the series.

Taking to Instagram, Gülsim Ali posted a sweet throwback photo with Ayeza to wish her a very happy birthday.

Sharing the photo in her Insta Stories, the Turkish actress wrote, “Happy birthday beauty Ayeza Khan, wish you all the best and good luck” followed by birthday cake and heart emoticons.

While Ayeza reposted Gulsim’s post in her stories and thanked her for her sweet wishes.