The convicted rapist in his 50s grabbed a girl and pushed her into his car. 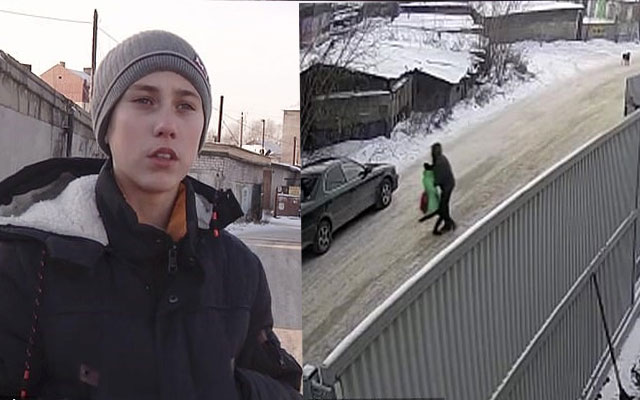 A 16-year-old boy with his heroic deed has saved a girl from sexual assault by a convicted rapist after hearing her desperate cries for help in the street in Irkutsk, Russia.

The boy Vyacheslav Doroshenko was walking through snow in the street after his basketball training where he noticed a man in his 50s grabbed a girl and pushed her into his car.

“I overtook her, arrived at the railway and listened to her screaming. And I noticed how a man was forcing her into a car,” said the teenager.

“I immediately turned around, saw the only adult person, ran to him, said to him what happened, and we ran towards the kidnapper’s car,” he added.

The man who Vyacheslav asked to help – named Gleb Sizykh – was heating his car engine after a factory shift.

The boy then got into Gleb’s car and they followed the pedophile abductor who had been freed from jail in 2017 after the second of two abuse convictions for which he completed jail sentences.

The abuser drove his car into a dead end and Gleb stopped his way out.

They faced the man then let the girl go and lied: “I got mistaken, I believed, it was my sister.”

He gave her his phone and the girl phoned her mother.

Meanwhile, the unnamed kidnapper fled but with help from Vyacheslav and Gleb, he was later arrested by the local police in less than an hour.

The girl was joined by her mother and is experiencing psychological counseling.