CNN’s New York office ‘All Cleared’ after the bomb threat 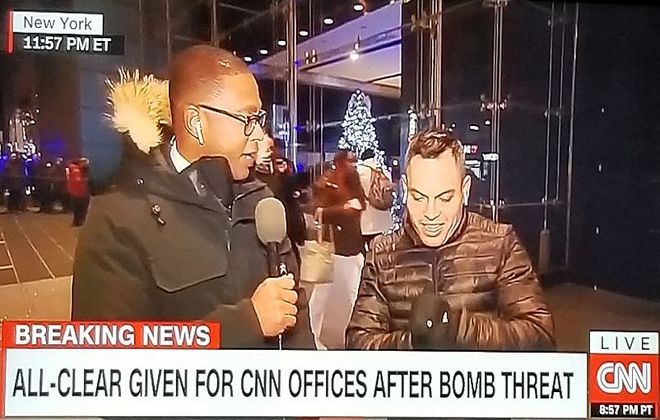 The NY Police and CNN have issued an all-clear message after the network’s New York offices and studios were evacuated Thursday night after getting a bomb- threat phone call.

#BREAKING The scene at 8th Ave by Columbus Circle as police investigate a bomb threat at CNN @PIX11News #CNN pic.twitter.com/714wY7YaO4

For a short while, the network aired recorded programming due to the disruption, after workers and on-air talent were asked to leave the building in the middle of CNN Tonight. Including “Anderson Cooper 360” on the East Coast.

CNN Worldwide president Jeff Zucker said in an internal memo to staff, “The NYPD has now given us the all clear, and employees have been permitted to return to the building. The building is secure and safe for everyone to return in the morning”.

Earlier there were series of tweets by CNN employees about the last night development.

CNN’s anchor Don Lemon tweeted that CNN’s floor in the Time Warner Center was evacuated in the middle of his nightly live show.

We were evacuated in the middle of my live show. Bomb threat. We’re running taped programming. NYPD is investigating. Stay tuned. #cnn #nypd

The NYPD is investigating a bomb threat near CNN NYC's office at Columbus Circle. Due to the threat, the office has been evacuated. Right now CNN is airing taped programming due to the disruption.

I was at Whole Foods, in the basement of the sprawling Time Warner Center complex, when I heard sirens upstairs. Now 58th St is closed off. pic.twitter.com/DEg3cW5eBB

Meanwhile, the President of the United States—a frequent critic of the cable news network, has tweeted few hours ago again targeting CNN

tweet
Share on FacebookShare on TwitterShare on PinterestShare on Reddit
Saman SiddiquiDecember 7, 2018
the authorSaman Siddiqui
Saman Siddiqui, A freelance journalist with a Master’s Degree in Mass Communication and MS in Peace and Conflict Studies. Associated with the media industry since 2006. Experience in various capacities including Program Host, Researcher, News Producer, Documentary Making, Voice Over, Content Writing Copy Editing, and Blogging, and currently associated with OyeYeah since 2018, working as an Editor.
All posts bySaman Siddiqui