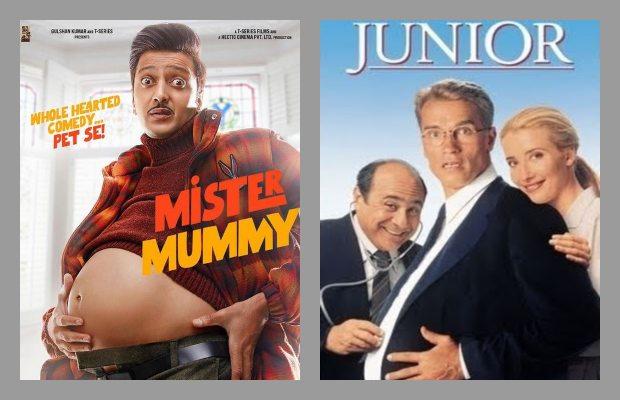 However, the latest poster from the film reminds us of Arnold Schwarzenegger‘s 1994 release Junior.

Read more: Did You Know These Bollywood Films Are Actually Copied From Korean Films

The popular Bollywood celebrity couple Deshmukh and Genelia will be seen together in comedy-drama Mister Mummy.

They were last seen together in the 2012 release, Tere Naal Love Ho Gaya.

As being reported, the film is based story of a grumpy man, played by Riteish, inexplicably getting pregnant.

The poster of the upcoming Bollywood film was unveiled a day ago.

Well, a similar scenario can be recalled from Arnold Schwarzenegger‘s 1994 release Hollywood film.

The film follows the story of Alex Hesse, an Austrian-American scientist who agrees to undergo a male pregnancy from a newly developed drug.


A research scientist becomes the world’s, first pregnant man. He has an embryo implant, believing that he will only carry the baby for three months – hardly expecting to face the prospect of giving birth.

Though the film miserably failed and is considered as one of Schwarzenegger‘s worst films.

Let’s see how this latest Riteish Deshmukh film is received by the fans as Bollywood is well known for ripping off foreign movies and dramas.