This comes after a video clip went viral, featuring Sarwat Gillani and Frieha Altaf who were on their way to the protest venue 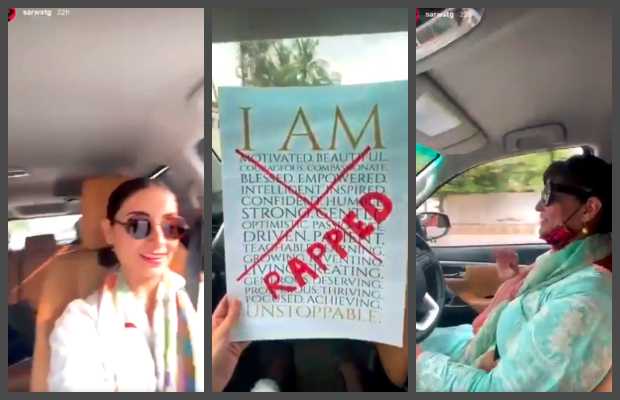 Special Assistant to Prime Minister on Political Communication Dr. Shahbaz Gill took to social media hitting out Frieha Altaf and Sarwat Gilani, after a video of theirs on their way to the celebrity protest went viral on social media.

It was a few days ago when the media fraternity staged a protest at Karachi Press Club demanding the safety of women and childern in Pakitan in wake of the motorway gangrape incident.

However, a video clip went viral on social media featuring, Sarwat Gillani and Frieha Altaf who on their way to the protest venue in a car can be seen are telling their followers that they are going to protest to demand justice for the motorway gang-rape victim and Sarwat is holding a poster which reads ‘Rapped’ instead of ‘Raped’.

SAPM Dr. Gill in a tweet shared the viral video clip, with a caption saying, ” These are the unfortunate elites of this society for whom everything is a joke”.

However, he was not the only one to call out these celebrities, social media is laden with posts criticizing celebrities for the vague protest.

It is incredibly difficult to call out women fighting for the same cause because you don’t want to hurt the cause and you want to be a good soldier for this war to protect women.

But honestly I’m exhausted by the fauxtrage, the empty words & the activism that goes with this https://t.co/SPdBU0axu0

Unbelievable. Celebrities thinking they are better than everyone else… https://t.co/u3D43oovHP

There were a few questions raised as celebrities held their own protest on 13th September, as a day earlier another protest was held.

Ace fashion designer Maheen Khan responded to that query, and so did Sarwat, however Sarwat after this episode has made her twitter account private.

Some of them attended that too . #stoprape was part of the Aurat march agenda and the Monday one was purely for #stoprape . The more people stand up against these atrocities the better.
The momentum must not be lost 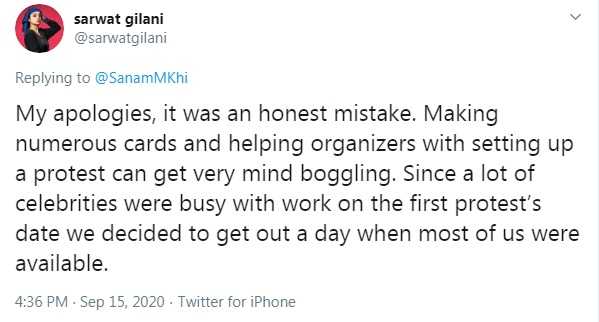