During the opening scene of the first episode called Stewie's First Word, the Pakistan Super League is mentioned. 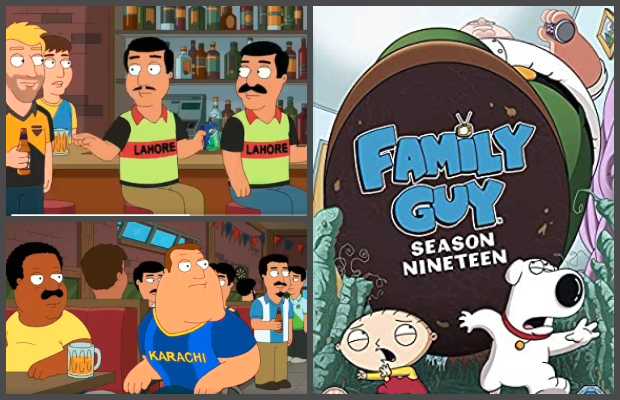 Family Guy Season 19 premiere launches with a joke about PSL’s Karachi Kings and Lahore Qalandars! that indeed a surprise for Pakistani fans.

Yes, you heard it right. Popular animated American series Family Guy premiered its 19th season on Sunday, that kickoff with a joke about PSL.

The clip doing the round on the internet shows a sequence where a few Caucasian characters are complaining about a pub being “full of weird foreign sports fans like those Pakistani hooligans”.

“If you are not rooting for Lahore, please you may leave I can tell you,” says one Qalandars fan with Lahore written on his jersey.

“Lahore cricketers are the best and the others are not the best, dear friends!” the other Lahore fan replies.

While Joe, who turns out to be a Karachi Kings fan, is shown to quickly covering his t-shirt and commenting “I am rooting for Karachi but I don’t have a death wish about it.”

This season's Family Guy premiere launches with a joke about Karachi Kings and Lahore Qalanders pic.twitter.com/ipWCVGJ8wQ

The clip has received the attention of Pakistani’s, who took to twitter sharing their views over this PSL joke:

PSL making it's presence felt in an unexpected way https://t.co/Acw7kWsryM