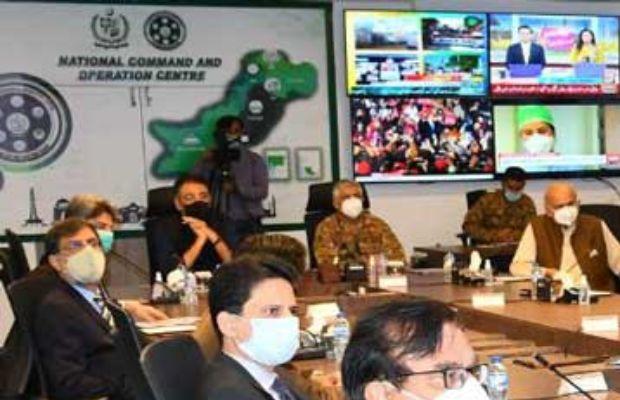 NCOC to take a decision on schools’ closure only after checking positivity rates!

On Monday, the National Command and Operation Centre (NCOC) said it will review data of positive Covid-19 cases in educational institutions before deciding on whether or not to keep them open.

Pakistan is currently in the grip of the pandemic’s fifth wave which is being driven by the highly transmissible Omicron variants cases are spreading at an alarming rate across the country.

The forum convened a meeting attended by the federal and provincial health and education ministers to suggest a new set of guidelines to deal with the worsening coronavirus situation in the country.

A new set of SOPs is being discussed, with its focus on schools and the education sector as a whole, public gatherings, marriage ceremonies, indoor/outdoor dining, and the transport sector.

A statement issued after the NCOC meeting said, “Decision about education institutions will be taken on data of positive cases of various institutions for which massive testing in educational institutions is being carried out.”

“Keeping in view new disease prevalence, a fresh set of NPIs was presented and discussed with provinces,” the NCOC statement said, adding the provinces will implement the new set of NPIs in the next 48 hours after the consultative process with all stakeholders.

Earlier in the day, Punjab Education Minister Murad Raas said classes for children under the age of 12 years will be allowed with 50 percent attendance.

He said that schools can’t be closed to prevent children from further learning losses. He added the government can’t take a decision on the closure of schools until other sectors are shut down.

Meanwhile, Punjab health minister Yasmin Rashid said that the government does not favour the closure of schools.

She added that Punjab has vaccinated 80% of its students in schools and colleges.

While on Jan 15, the Sindh government’s coronavirus task force decided to keep all educational institutions in the province open.

Sindh Chief Minister Murad Ali Shah presided over the Task Force meeting that announced a set of restrictions to control the fifth wave of the pandemic.

tweet
Share on FacebookShare on TwitterShare on PinterestShare on Reddit
Saman SiddiquiJanuary 17, 2022
the authorSaman Siddiqui
Saman Siddiqui, A freelance journalist with a Master’s Degree in Mass Communication and MS in Peace and Conflict Studies. Associated with the media industry since 2006. Experience in various capacities including Program Host, Researcher, News Producer, Documentary Making, Voice Over, Content Writing Copy Editing, and Blogging, and currently associated with OyeYeah since 2018, working as an Editor.
All posts bySaman Siddiqui