Seventy-four people were killed on October 31 after the Tezgam Express caught fire near Rahim Yar Khan. 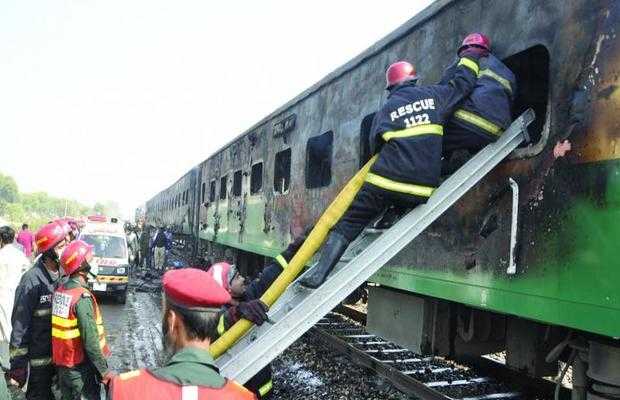 The latest inquiry report reveals that the Tezgam fire that took the lives of more than 70 people on board was caused by a short circuit, not a cylinder explosion.

The findings of inquiry reveal that the twelfth coach of the Tezgam Express had caught fire after an electric kettle short-circuited and caught fire.

The dining car manager and waiters had set up a makeshift kitchen in bogies 11 and 12, said the report, where the fire broke out.

The fire spread to three bogies of the moving train. Taizgam was heading to Rawalpindi from Karachi and was near the Tanwari Railway Station when the fire erupted.

While talking to Geo News, Leghari revealed that the coach was being supplied electricity ‘illegally’ from another coach. He further added that the cylinder blast earlier believed to be the cause of the tragedy actually took place after the fire had engulfed the coach.

Railways CEO also shared that 15 officials have been suspended after an inquiry into the incident, including a deputy divisional superintendent and a commercial officer.

Right after the accident Railway authorities, including Railways Minister Sheikh Rasheed, had blamed passengers who had brought cylinders on the train. The passengers, all from the Tableeghi Jamaat, had brought gas cylinders and were cooking food when one exploded, causing the fire, authorities had alleged.

According to the ministry, there were 933 passengers on the train and 207 in the three bogies that caught fire.