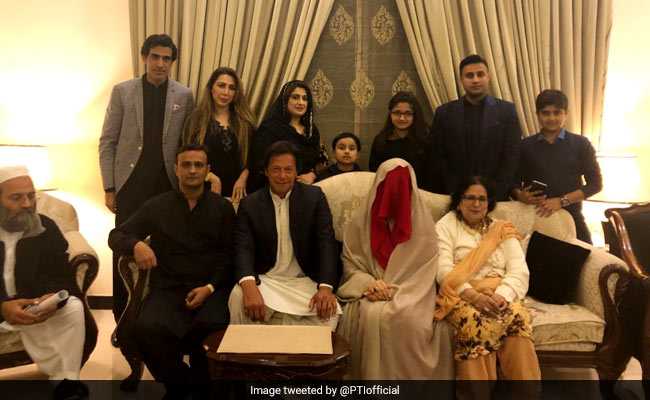 Pakistan’s most popular leader Imran Khan tied the knot for the third time last night, this time with Bushra Maneka. Regarded as Khan’s spiritual mentor, Bushra Bibi has now become Khan Sahab’s third wife; rumors about which had been circulating for quite some time now. However, PTI put all speculations to rest with the Nikah announcement and it seems, Kaptaan has finally had his hattrick.

Read More : “My marriage with Reham is the biggest mistake of my life,” Imran Khan

Last night I was loving my TL, as Khan sahab’s wedding was all over twitter and  hash tag #MubarakImranKhan was the top trend.  All top leadership of PTI, journalists and celebrities were congratulating Imran Khan. Insaafians seem exuberant to have another bhabi 🙂

It was a very simple gathering of very close friends and family member where the auspicious Nikah ceremony took place in Lahore. Bushra Bibi seems a very pious lady as she was observing a veil through out the ceremony and has not shown her face. According to news, Bushra Bibi will not take charge of any party activities and will devote her time to home and family.

Twitter was very active last night, the hilarious part were the number of tweets coming in from the fake accounts and those congratulating Imran Khan albeit the sarcasm. Have a look

This guy had a suggestion!

If your wife can’t change your life.
Change your wife.#MubarakImranKhan pic.twitter.com/4YC6oGr6Jn

And we love this guy’s determination!

He wants to be PM next, be afraid, be very afraid you curropt lot 🙂 #MubarakImranKhan

Let’s all have a throwback on IK’s expense!

He speaks our heart!

Raiwind’s wind is quite tight at the moment!

tweet
Share on FacebookShare on TwitterShare on PinterestShare on Reddit
Rameeza NasimFebruary 20, 2018
the authorRameeza Nasim
Rameeza Nasim, a Paralian, poet, passionate about poetry, drama and fiction. By giving drama critiques I feel like I am endorsing the writer's message to the audiences and also stressing on what Writers trying to say through his character portrayals and story, I love my job. Being a critic responsibility lies on my shoulders to point out the flaws and shortcomings of the play be it on writer's , performers or director's end . I did my Masters in English Literature and Linguistics and I earn my living through writing.
All posts byRameeza Nasim