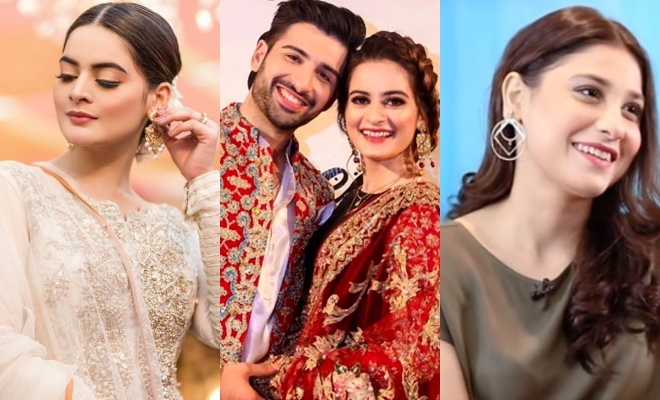 Aiman Khan and twin sister Minal are known for their close bond and Masha Allah kind of sisterhood that is quite rare to find these days. It also means that both the beauties have each other’s back through thick n thin. So when Hina Altaf threw shade at Aiman’s dear husband Muneeb recently, both the sisters lashed out on her.

Recently Hina attended a talk show To Be Honest, that is hosted by Tabish Hashmi. During the interview, Hina was asked who is that one actor that she finds untalented yet arrogant. To this Hina blatantly said Muneeb Butt.

Now Hina’s comment might have gotten off from Muneeb’s wife and fans’ radar, however what followed after was quite a low blow from the host. Tabish Hashmi showed his unawareness on who Muneeb Butt is and while he seeked Google’s help to know, Hina added, “Oh just google #aineebkishadi, the extravagant wedding.”

Tabish, who one would assume to be an objective host, then mocked Aiman and said that he remembers the wedding because of the bride who posted anti-dowry message on social media right after her own lavish wedding.

The video clip from this interview then went viral on social media, and Aiman who is currently away from television projects called out both Hina and Tabish on social media.

“Shame on these people for making fun of their colleagues,” Aiman wrote.

Aiman’s sister Minal too came out in support of her sister and brother in law and bashed Tabish and Hina for being ‘uneducated host and guest’.

“Why do we hate each other so much? Such uneducated host and guest!” Minal commented.

Muneeb has however maintained silence over the recent controversy, and seems like Aiman and Minal’s duo is at Hina’s case now. Whose side are you going to take?