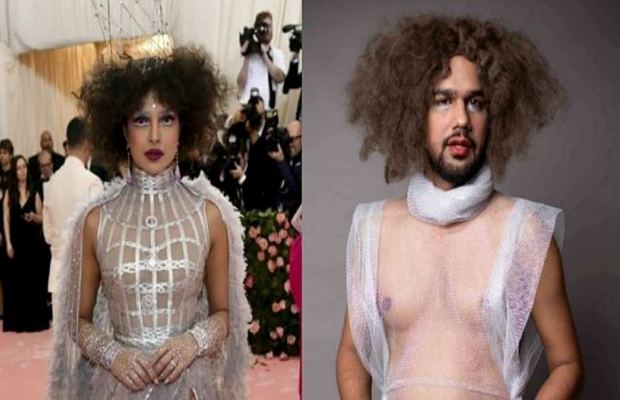 Ali Gul Pir who is known for wit and humor on social media savagely dished out revenge to Priyanka Chopra for inappropriate demeanor at the recent women’s conference. The singer imitated Priyanka’s Met Gala 2019 look but with a weird twist to mock the actress.

“When you’re done venting,” captioned Ali his Instagram post where he shared a horrendous imitation of PeeCee’s look from the event. Albeit that Priyanka herself dressed in a shabby Dior design raised too many eyebrows, Ali’s rendition further brought down the actress’s fashion attempt.

“The caption has been written with the same type of sarcasm that Priyanka used in her reply to the journalist. She could have responded in an appropriate manner,” said Ali while talking to Samaa. He referred to the infamous incident that happened earlier in New York which left Pakistanis angered at the actress.

Earlier this year Priyanka Chopra made it to news, for quite a wrong reason, when she ridiculed Pakistani journalist Ayesha Malik for questioning PeeCee’s role as UNICEF ambassador.

Shortly after Pulwama attack when Pakistan and India were in a tense situation, Priyanka instead of promoting peace, tweeted in support of the Indian army – a move questioned by many as her role as a peace ambassador for UNICEF.

When Priyanka was questioned by Ayesha at an event, the former tried to humiliate the latter instead of giving an appropriate reply. Ali’s move came as a response to the same event.