“This is some other lady,” said Fatima on her Instagram regarding FIA’s forensic results. “We are now investigating and soon will share who falsely circulated this video and purposely tried to deteriorate my reputation,” she further added.

As per Fatima’s request, the video has been taken down from all social media sites and the matter is under investigation.

“Ms. Fatima Sohail is a known TV anchor and media personality. On the 4th of Dec, 2019, a sexually explicit content (video) impersonating to be Ms. Fatima Sohail was found circulating on social media including Twitter, Youtube, and Whatsapp,” said FIA in a statement to PTA to whom the request was made under Section 37 of PECA-2016. 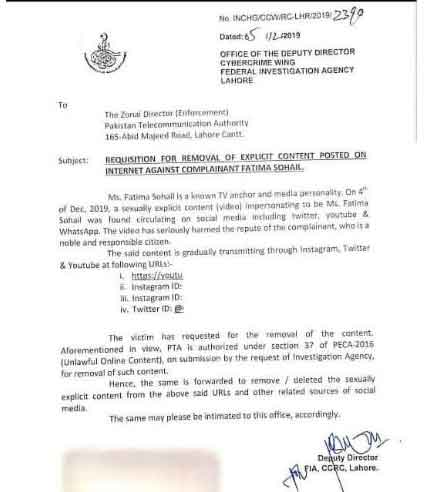