It seems like Yasir Hussain is having a hard time adjusting to the norms of 2019, and one after the other the actor lands himself in trouble for his not-so-thought-through and blatantly insensitive remarks. Now while Yasir has been brushing it under the carpet of humor (like the recent transphobic comment) or apologizes for his unintended ‘bad joke’ (like the child molester remark), the truth is that the Karachi se Lahore actor has repeatedly gotten a little too much out of his mouth.

This time the actor tried to ‘joke’ with his colleague and friend Hania Amir and it did not go well at all.

Hania, who had been battling her acne for quite some time now, chose to come out and speak of the experiences she has had. Her intention was to break the so-called beauty standards and own up to the apparently flawed yet beautiful skin each girl/individual possesses. Many applauded Hania for her brave act and pretty much agreed to her point of view.

Now while the world was busy admiring Hania’s stance, somewhere somehow Yasir Hussain was asked by a fan to give ‘one word for Hania Amir’. And like a kindergartner would respond, Yasir did not hesitate to call his friend ‘danedaar’ – errmm okay! 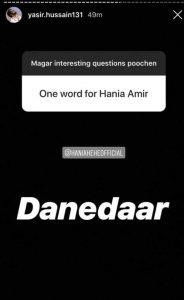 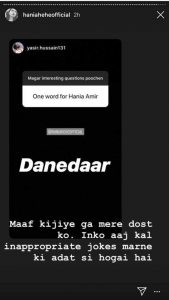 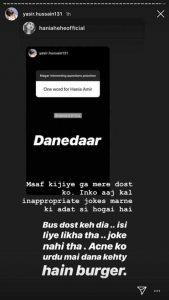 Although both the celebrities had a few responses back and forth between them, it was eventually Hania who gave a fitting reply to Yasir and pretty savagely schooled him.

“We brush off insecurities and people pointing them out, like it’s no big deal; but knowing it’s someone insecurity and still making fun of it is the worst thing you can do! It is wrong on so many levels,” said the Parwaz Hai Junoon actress on her Instagram.

Adding further she wrote, “It is high time people realize it is not okay to make jokes out of other people’s insecurities. It’s disgusting and not funny at all.” 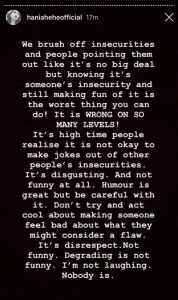 Giving a powerful conclusion to her post, Hania said, “Don’t try and act cool about making someone feel bad about what they might consider a flaw. It’s disrespect, not funny. Degrading is not funny. I am not laughing, nobody is.”

It seemed like Hania’s fitting response to Yasir did work pretty well as the actor later removed his Instagram post regarding Hania. However, it is important to applaud Hania for once again calling out on the bullying and ensuring that this stops right here. It is 2019, and yes it’s high time for Yasir and everyone else to understand to not laugh at the expense of someone else’s misery.