The return of international cricket at NSK has brought along a lot of wonderful memories. 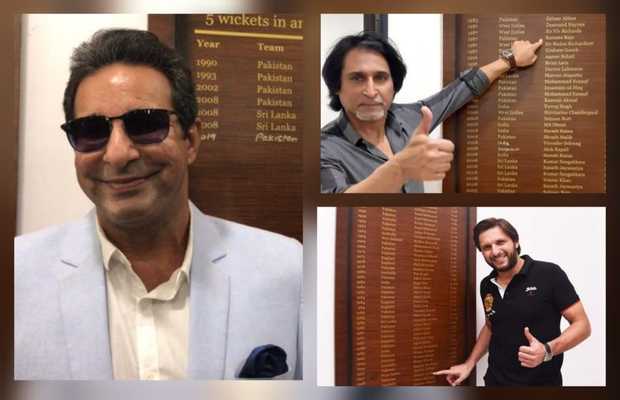 Former Pakistan all-rounders Wasim Akram and Shahid Afridi on Wednesday paid a visit to the newly installed honours board at the National Stadium Karachi (NSK), which took both the cricket stars down the memory lane.

Cricket icons @wasimakramlive and @SAfridiOfficial are two of the superstars on NSK Honour Boards. Let's hear them recall their memorable bowling performances at the historic venue.#PAKvSL pic.twitter.com/toYuWEZtaV

The board installed at the NSK bears the names of local and foreign cricketers who have achieved major feats at the Notational stadium over the years.

It has become somewhat of an attraction lately as international cricket has returned to Karachi after a long time with this ongoing Pak vs SL ODI series.

Shahid Afridi had a five-wicket haul against Australia in a Test match in 1998 which has earned him a place on the prestigious plank.

Recalling his Test debut five-for @SAfridiOfficial another superstar on the NSK Honours Board! ⭐️#PAKvSL pic.twitter.com/3By609cvED

Meanwhile, the Sultan of Swing, has his name on both the boards for ODI and Tests match records.

The legend on the NSK Honours Board! @wasimakramlive recalls his ODI and Test five-fors against Zimbabwe and Australia. Two very special performances from a very special cricketer.#PAKvSL pic.twitter.com/mPSEEgo8bJ

The seventh bowler to take an ODI five-wicket haul at the National Stadium Karachi. @Usmanshinwari6 doing the honours of his induction on the NSK Honours Board.#PAKvSL pic.twitter.com/0AvjOB0Ybg

Ramiz Raja also paid a visit to the NSK Honours Board! His name is there for scoring 113 runs against England in 1987 world cup match, which Pakistan won.

Some superstars on the NSK Honours Board! @iramizraja 113 against England in the 1987 @cricketworldcup match turned out to be a match winning innings. pic.twitter.com/pq4Igm33uI