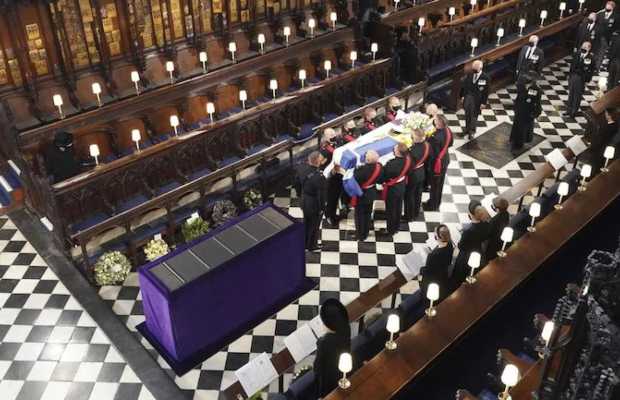 Prince Philip was laid to rest after a strict COVID-19 protocol funeral on Saturday.

Prince Philip, the Duke of Edinburgh, who died on April 9 at age 99, was interred in the Royal Vault at St George´s Chapel alongside the remains of 24 other royals, including three kings of England after a 50-minute service attended by just 30 guests.

The queen set an example even in grief, as she sat apart from family members who were arrayed around the church during the funeral service.

The entire royal procession and funeral took place out of public view within the grounds of the castle, a 950-year-old royal residence 20 miles (30 kilometers) west of London, which was broadcast live on television.

Instead of the 800 mourners expected in the longstanding plans for Philip’s funeral, amid pandemic restrictions, only 30 people were allowed inside the castle’s St. George’s Chapel.

The people in attendance included the widowed British monarch, her four children, and her eight grandchildren.

The 30 funeral guests also included other senior royals and several of his German relatives.

During the service, Prince Charles, the heir to the throne, sat opposite the monarch alongside his wife, Camilla. While Prince Andrew sat apart at two seats to the queen’s left.

Meanwhile. Prince William and his wife, Kate, sat directly opposite from his brother, Prince Harry, who had travelled back from California without his pregnant wife, Meghan.

The whole world’s eyes were set on Prince Harry who for the first time reunited with his family after stepping down from royal duties.

The world also witnessed as Philip’s coffin was lowered into the Royal Vault, Royal Marine buglers sounded “Action Stations,”, a naval call to battle that alerts sailors to prepare for battle.
Its inclusion, after the traditional bugle call of “The Last Post,” signaling that a soldier has gone to his final resting place. It was a personal request from Prince  Philip.

This afternoon, The Duke of Edinburgh’s Funeral took place at Windsor Castle.

It was a family occasion which recognised His Royal Highness’s military associations and included some unique personal touches, in line with The Duke’s wishes: https://t.co/utgjrb8rmD pic.twitter.com/bYWCMsEgk3

The Funeral procession moves from the Quadrangle of Windsor Castle to St George’s Chapel.

The coffin is carried by a Land Rover designed by The Duke of Edinburgh, & accompanied by Armed Forces representatives, members of the Royal Family, The Duke's Household and The Queen. pic.twitter.com/w0AhnbP95y

Yesterday millions of people around the world heard four Royal Marines Buglers fill St George’s Chapel at Windsor with the haunting echo of the Royal Navy’s historic call to battle.

The world attempted the funeral through the eyes of social media. The main highlights of the funeral procession filled the Twitter timeline.

These were among the most moving images for me… pic.twitter.com/TwKd2RUgIG

Two brothers, seen together for the first time in more than a year on the saddest of days. Picture by @ianvogler pic.twitter.com/mrBQsSXxGJ

An historic day. Nobody in the world does it better. I was so pleased to be at Windsor today. pic.twitter.com/KqpvSU9ziG

The Queen wears Queen Mary’s Richmond Brooch, inherited from her grandmother, at the funeral of her husband of 73 years, Prince Philip. #DukeofEdinburgh pic.twitter.com/5NCoL6YJT6

The Duke & Duchess of Cambridge and Prince Harry walk back to Windsor Castle together #PrincePhilipFuneral pic.twitter.com/PN1ko1NRzR

tweet
Share on FacebookShare on TwitterShare on PinterestShare on Reddit
Saman SiddiquiApril 18, 2021
the authorSaman Siddiqui
Saman Siddiqui, A freelance journalist with a Master’s Degree in Mass Communication and MS in Peace and Conflict Studies. Associated with the media industry since 2006. Experience in various capacities including Program Host, Researcher, News Producer, Documentary Making, Voice Over, Content Writing Copy Editing, and Blogging, and currently associated with OyeYeah since 2018, working as an Editor.
All posts bySaman Siddiqui 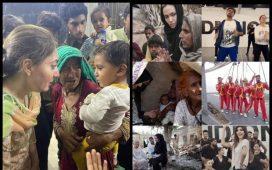 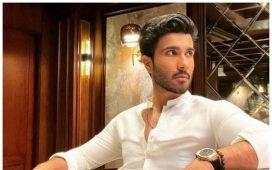 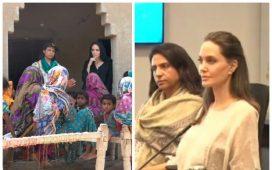 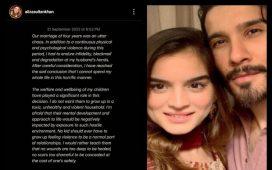 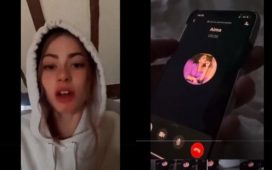