Rihanna, The Savage x Fenty CEO has appologised to the Muslim fans for including Hadit in her latest fashion show.

The singer turned entrepreneur drew serious criticism towards her after using a Hadit in Savage X Fenty Show 2020.

However, she took to social media seeking forgiveness for upsetting Muslim fans all around the globe during her latest fashion show. the 32-year-old thanked the Muslim community for highlighting the issue and apologised for hurting their sentiments.

“I’d like to thank the Muslim community for pointing out a huge oversight that was unintentionally offensive in our savage x Fenty show,” she wrote in an Instagram post.

“I would more importantly like to apologize to you for this honest, yet careless mistake. We understand that we have hurt many of our Muslim brothers and sisters, and I’m incredibly disheartened by this! I do not play with any kind of disrespect toward God or any religion and therefore the use of the song in our project was completely irresponsible! Moving forward we will make sure nothing like this ever happens again. Thank you for your forgiveness and understanding”, she added. 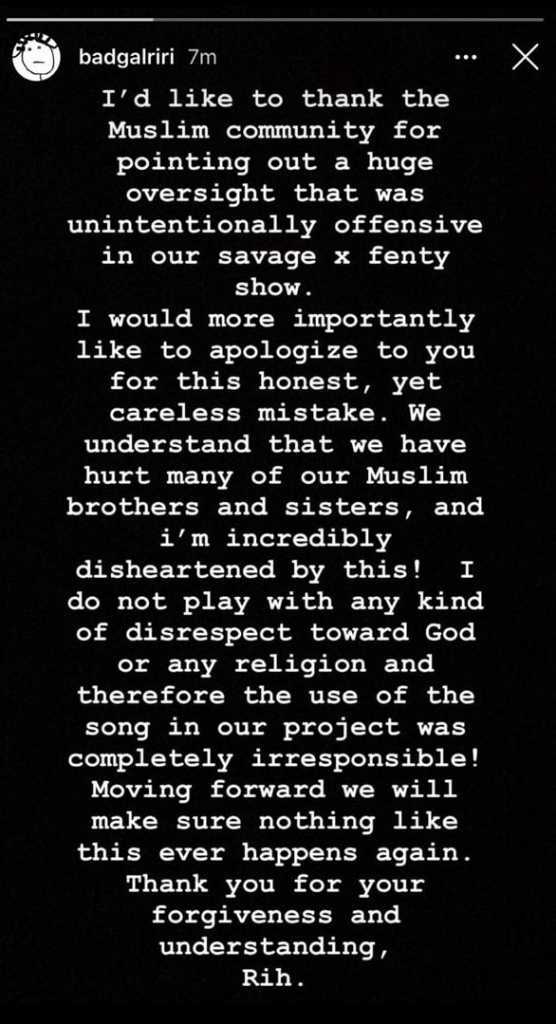 Meanwhile, music producer Chloe who was behind the offensive song also took to social media seeking apology and acceptedresponsibility if the mishap.

Chloe aslo said that they are in process of removing the song from all streaming platforms.

The song, titled Doom, was created by London producer Coucou Chloe. The music producer used samples of the Hadith mixed into a house beat, which played as models performed on the catwalk, which debuted on Amazon Prime Video at the start of the month.