Umer Sharif departs for the US in air ambulance 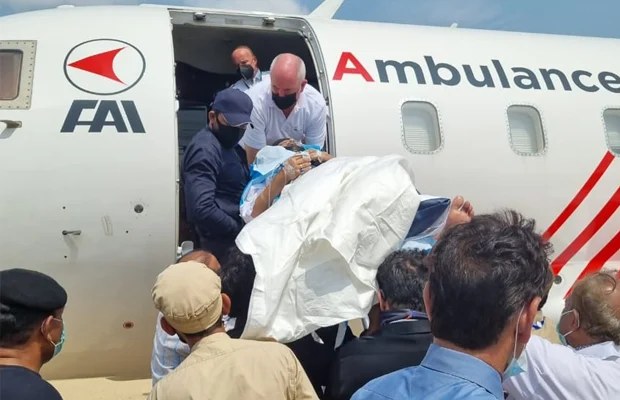 Umer Sharif departs for the US in an air ambulance on Tuesday.

He was taken to the airport from where he flew out to Washington for his treatment in a German air ambulance.

Doctors at the private hospital in Karachi declared him fit to travel despite initial concerns on Monday that he was unwell to travel.

A day earlier his blood pressure had dropped after dialysis and the air ambulance had threatened to leave.

“Umer Sharif Sahab is on his way to the airport for his flight to Washington,” Wahab tweeted, adding, “Please remember him in your prayers.”

Umar Sharif sb is on his way to the airport for his flight to Washington. Plz remember him in ur prayers

Cardiologist Syed Tariq Shahab, who is actor Reema Khan’s husband and will be treating Omer Sharif in Washington, said that Omer will have to wait 48 hours before the experts can make a decision about travel.

Umer Sharif is to be shifted to George Washington University Hospital for medical treatment.