Maaz refrains from divorcing because of her mother 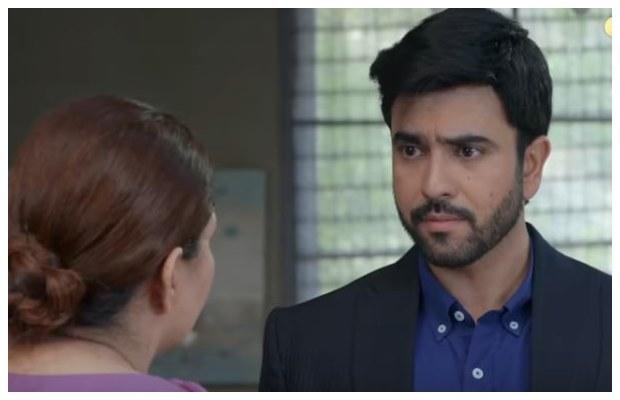 Express TV drama serial Ek Jhoota Lafz Mohabbat with its toxic narrative is  21 episodes down. Performances are quite good. In the previous episode, Maaz has turned into a huge disappointment who slaps his sister so hard that she ends up having a miscarriage. In this episode too Maaz continues to be a disappointment, Areesha is forcing Maaz to divorce Aleeza but his mother stops him from doing so.

Maaz has turned into a huge disappointment and in this episode, he continues to disappoint us. In the opening scene where Maaz is regretting hard about his conduct and also feeling guilty over the loss of her sister’s child, out of nowhere, Areesha in a very cheerful mood suggests he go out for an outing to cheer themselves up. Maaz is really a nincompoop who clearly sees such an insensitive side of Areesha and still he is siding with her.

Maaz truly deserves that tight slap from her mother when he dares to ask how is his sister? Maaz’s mother is truly suspecting vile Areesha as the main cause of her daughter’s ruin. She tells Maaz that she cannot see her in this house on which Maaz disappoints us all by taking Areesha’s side saying that she will not go anywhere. He is truly blind in love.

Maaz’s mother has now at war with Areesha. Areesha has too made up her mind that she is eventually going to snatch Maaz from his mother. Maaz’s mother wants to take Maria’s revenge from Areesha and for that, she knows that she has to bring back Aleeza. Maaz is getting warnings after warnings from his boss. Saad is not understanding Aleeza’s position after all that has happened he still goes to her place and despite her avoiding him he slides down the slip of his sister’s number. His intentions are good, he wants to help but the neighbors are too toxic.

Neighbors call Maaz and coincidentally Areesha is with him. She deliberately demeans Aleeza and she starts character assassinating her own sister, forcing Maaz to divorce her. Maaz’s mother intervenes and stops him from divorcing Aleeza. Areesha puts great pressure on Maaz she is shouting like a lunatic forcing him to divorce Aleeza but Maaz’s mother does the drama of fainting and the whole focus has shifted towards her. Maaz’s mother later tells Areesha that her love is nothing in front of a mother on which Areesha makes up her mind that she is going to take Maaz from her as well.