Will Komal realize the root cause of all her problems? 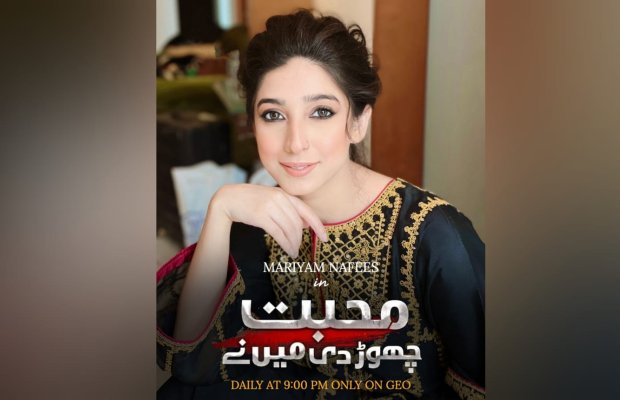 Mohabbat Chor Di Maine the drama airing at Geo Entertainmet unfolds a gripping story of power struggle in a household.

Mohabbat Chor Di Maine is directed by Shaqielle Khan and after a long time, we get to see the drama being shot on heavily decorated sets.

The story of the play revolves around Komal played by Hajra Yamin, who now has a sautan in her life, played by Maryam Nafees.

After 22 episodes down, the story plot has somewhat become clear the relations are tied up holding some grudges from the past.

While Mariyam Nafees as Sehar outshines playing a simple-minded village girl. This is the first time that we see Mariyam play such a character on screen. Her transition into the character from a modern girl into a girl speaking in Punjabi looks cute.

Sehar has now become the mother of a son being Omar’s (Mohsin Abbas Haider) second wife, but life is still not easy for her.

She is being constantly reminded of her social background and status by Komal (Hajra Yamin). Her harsh criticism and remarks have led to Sehar’s collapse and having a premature baby. Sehar was trying to defend her sister-in-law, a widow, who was accused by Komal for filtering with her cousin.

Sehar, bedridden after childbirth is unaware that her mother in the village is being blackmailed by her cousin again, who threatens her to kidnap her.

Komal is still in a state of denial that she hasn’t wronged anyone. Though she appears to be a soft-spoken woman but keeps grudges. Despite the bitterness of the past, Komal wants to make sure that she happily married to Omar.

Komal’s pride in her life was shaken to the ground when she learned about Omar’s alternative life that he has been living for many months. Shocked to see her pride and ego-shattering,

She has built her lifestyle in that she controls her husband and her in-laws. However, she has chosen to not become a victim and decides to entangle Omar in the web of lies and mental torture taking revenge.

Sehar’s growing influence in the lives of her husband and sister-in-law is becoming unbearable for Komal. Komal’s insecurities now speak volumes as Sehar has now given birth to a boy and she has a seven-year daughter now.

Will Komal realize the root cause of all her problems?