Will Dua go to America with Bobby or leave him? 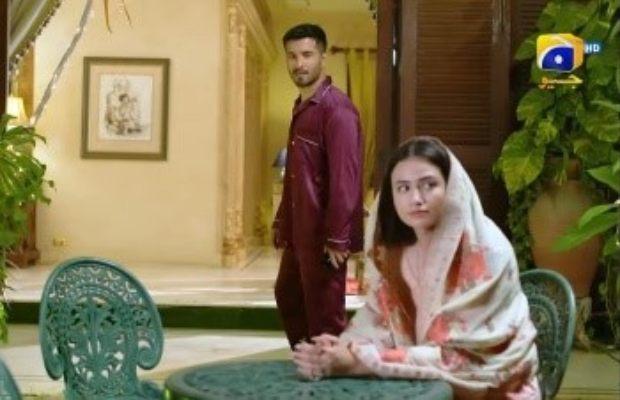 Aye Musht-e-Khaak is 7th Sky Entertainment’s second blockbuster in a row after Khuda Aur Mohabbat S3. The two shows are similar in terms of intensity, a strong love story, interesting characters, and also how the two have enjoyed and are currently enjoying a lot of popularity and love from the audiences. Aye Musht-e-Khaak is a commentary on making wise choices when it comes to marriages, and how ego and arrogance can destroy lives.

At the beginning of the episode, Shakeela tells Bobby he shouldn’t have broken Dua’s trust. He tells her that she hurt him but Shakeela tells him it was Bobby who hurt Dua in the first place.

Dua meets the imam sahib of their mosque. She asks him how can she be with a man who doesn’t know anything about his religion. He tells her to have faith in the relationship that she has formed with Bobby.

Bobby goes to Dua’s place but she isn’t there. He follows her to the mosque and apologizes to her for his behavior and what he did the other day.

Shakeela is rushed to the hospital because she falls sick. There, she tells Dua’s family that she wants Dua to come home soon. She can’t wait any longer unless something were to happen to her.

Dua is reluctant because this would mean giving up her studies and everything she had worked so hard for. After a little convincing from Dayaan, she agrees and the two get married,

Dua’s mother feels they have done an injustice by marrying her off against her wishes. She knows now Bobby will do whatever he wants. He will take her to America even though he said he wouldn’t and won’t let her complete her studies. Dayaan tells her everything will be alright.

On the night of the wedding, Dua leaves Bobby so she can pray. This irks Bobby who tells his mother about it the next day. Shakeela tells him to never come between Dua and her religion.

Dua’s family comes to see her the next day. Dayaan makes fun of Dua jokingly while looking at her wedding pictures. Bobby takes offense to that and forbids him from making fun of Dua again. Later, he apologizes to Dua and Dayaan.

Dua comes to her mosque with Bobby and Shakeela. While they are there, Bobby remains indifferent and disinterested in everything the imam is telling them.

Shakeela asks Bobby where they are going for their honeymoon. He says America but Dua refuses to go straight away. She has her classes and Ramzan and they can’t go during the holy month because she has to pray and observe fasts. She asks Bobby about all the promises he made to her to which he confesses that he said them just to get married to her.

The show belongs to Feroze Khan and Sana Javed. Their characters are the exact opposite of each other but they are the glue that keeps everything together. Bobby is arrogant, impulsive, short-tempered, spoiled and the definition of chaos. On the other hand, Dua is tenderness, love, sensitivity, and calm. Khan and Javaid deliver brilliant performances.

What will happen next? Will Dua go to America with Bobby or leave him? To find out, watch this space for more and keep watching Aye Musht-e-Khaak on Mondays and Tuesdays at 8 pm on Geo TV.