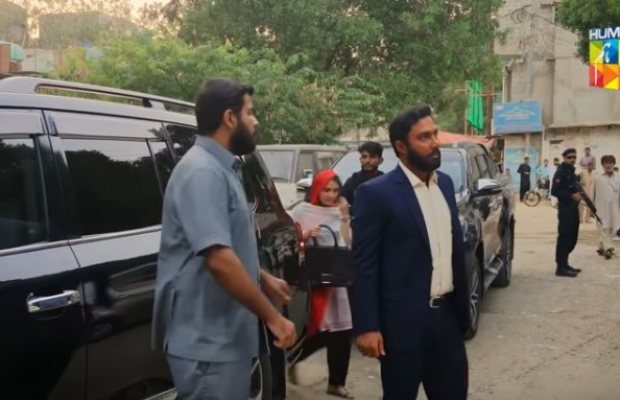 Parizaad the magnum opus running at Hum TV has our heart. This episode is special because of the much-awaited entry of Yumna Zaidi’s character as Ainee in the play, Ainee is adding colors in the story and it seems that she will bring the old poetic Parizaad back. In the previous episode we have seen that wealth has not polluted Parizaad’s soul, he continues to be a pure soul.

The episode begins when Parizaad procures Kallu Ustaad’s garage address, he goes there to meet him, Kallu Ustaad is more than delighted to meet him. It was through Kallu Ustaad that Parizaad met Janu and Behroze Karim and eventually becomes the owner of this enterprise. Parizaad tells his manager to help in setting his garage in a way that Kallu Ustaad’s self respect remains unhurt.

Majid goes to meet Parizaad in his office, his eyes gets widen when he sees Parizaad’s luxurious office and his opulence. Majid gets envious of Parizaad’s status. Well there is a flaw in the story. Naheed and her family lives in Rawalpindi and only Majid is supposed to visit Karachi for job search but how come the whole family entirely shifts to a new city in such a short span of time? It is not believable at all and seems like a flaw not trivial one.

Majid is so envious that he cannot stand working in his office as his employee but he requests him to hire his sister in law kanwal. Parizaad agrees on that but later we have seen that Majid is being suspicious for Parizaad like a loser when he sees Kanwal coming in staff car. Well it also seem that Naheed is kind of hitting on Parizaad she asks him to meet her somewhere outside but her sudden advances has startled Parizaad, he does not seem comfortable. Behroze Karim words that world worships the rising sun echoes in his mind.

One of the cute scene is when Parizaad once again tunes in to DJ Aniee’s radio show and there once again she recites his poem. Ainee seems a huge fan of Parizaad. She also attends the event where Parizaad recites poetry after ages. Ainee is blind, the way she is shouting “Parizaad sir I am big fan and want to take your interview” looks so cute but unfortunately Parizaad does not hear her but Kamali has given her his office number. It seems that Ainee will going to add colors and life to Parizaad’s life and she will also bring out the poetic Parizaad back. What a cute entry!

tweet
Share on FacebookShare on TwitterShare on PinterestShare on Reddit
Rameeza NasimNovember 30, 2021
the authorRameeza Nasim
Rameeza Nasim, a Paralian, passionate about poetry, drama and fiction. By giving drama critiques I feel like I am endorsing the writer's message to the audiences, I love my job. Being a critic responsibility lies on my shoulders to point out the flaws and shortcomings of the play be it on writer's , performers or director's end . I did my Masters in English Literature and Linguistics .
All posts byRameeza Nasim