Dune proves more like a futuristic war movie, while a limited range of color on the screen adds more to the weirdness of the sci-fi. 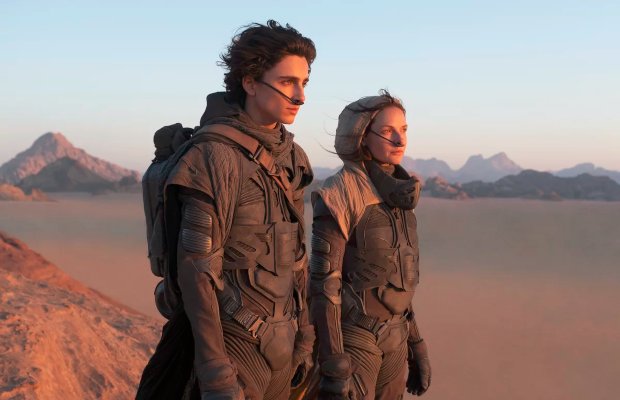 Usually watching films based on books is not an easy thing, and there are a lot of expectations, unexpectedly get attached to the outcome, that too when there are already a number of films made on the same.

Villeneuve’s version of Frank Herbert’s 1965 novel opens with a title reading “Dune: Part One”, literally giving to hint that the business will not finish in the next 2 and a half hours. Yeah, that’s the film’s run time, 2h 35m to be precise.

And after watching the whole, film, our verdict: Dune with a 165 million USD budget Sci-fi/Adventure is ‘Stunningly Cinematic That Ends Abruptly.”

As per the story human beings have spread out and colonized planets throughout the universe in the future.

Set in 10191, AG. AG stands for “After Guild”, the film opens with an army suddenly withdrawing from Arrakis, a desert planet with valuable resources of melange, a spice drug that is extremely popular with wealthy people. And here is from where the ground for universal power politics is set.

Duke Leto (Oscar Isaac), of the House of Atreides, while being on the planet Caladan, is preparing to leave for his new position as the governor of Arrakis, Leto and his family, including his concubine, Jessica (Rebecca Ferguson), and his son, Paul, suspect a trap by their rivals, the Harkonnens, led by Baron Harkonnen.

Leto has made up his mind to settle on Arrakis because of its rich supplies of melange, despite warnings from his closest aides, including his adviser, Thufir Hawat, and his master-of-arms, Gurney Halleck.

Timothée Chalamet, 25, playing the young Paul Atreides, was impressive. The young prince is a brilliant and gifted young man born into a great destiny beyond his understanding, He is troubled by visions of the future. Paul Atreides finally come to know why he must travel to the most dangerous planet in the universe to ensure the future of his family and his people.

Soon after the Atreides’  arrival on Arrakis and the duke rushed to move to secure the planet from a Harkonnen attack.

Leto’s main plan was to enlist the Fremen, the tough natives of the Arrakeen desert, as soldiers and advisers. Meanwhile, Paul’s and Jessica’s special abilities intrigue the Fremen. However, the house of Atreides fell as expected. Dr. Yueh, a member of the Atreides’ house, betrays them and led the Harkonnens to take over.  But in his guilt, he helps Jessica and Paul escape.

The Fremen believe that Jessica and her son are saviors who have come to lead them toward creating a lush paradise on the dry Arrakis. And by the end, it gets clear that almost all of Paul’s visions and dreams have become reality.

Dune proves more like a futuristic war movie, while a limited range of color on the screen adds more to the weirdness of the sci-fi.

Jason Mamoa, for me, went unimpressive in the character, trying to bring a swashbuckling charm to the role of House of Atreides swordmaster Duncan Idaho. The actor who already has a few solid characters added to his portfolio including The Aquaman and Drogo from Game of Thrones, this Dune character seems a miss.

Let’s see how soon can we get a sequel to this film.