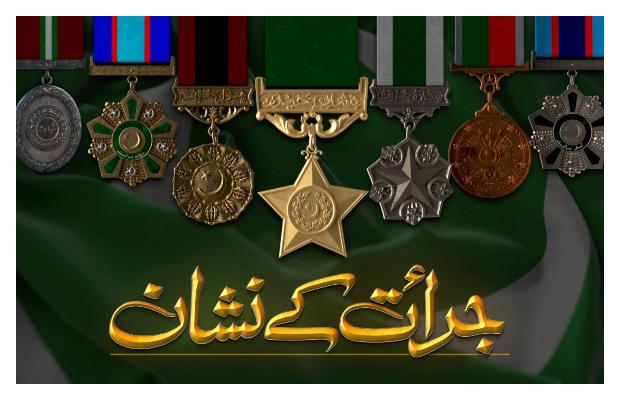 New docu-drama series titled ‘Jurrat ke Nishaan’ is being launched to commemorate our unsung heroes of the war on terror.

Time and again, the sky has witnessed terror being terrified by Courage; courage that dares to defy all adversaries and fearlessly fight the cold-blooded cruelty. ‘Jurrat ke Nishaan’ is a personification of such courage displayed by personnel of the Pakistan Armed Forces on different fronts, but seldom seen! It lets you witness a few instances of valor, passion, and determination; where wars were won through sheer power of will, where fights were fought despite all odds, and sacrifices were made without an iota of doubt.

While the series pays tribute to the unyielding determination and undying spirit of five brave hearts; it also acknowledges the selfless efforts and countless sacrifices made every second of every day by saluting worthy, courageous souls protecting the soil of this Pak Land.

A thrilling story of unparalleled valor, selfless sacrifice, and chivalry. It focuses on the final act of valor of the Shaheed. It has glimpses of Major Shujaat’s personal life, his journey in SSG, and his unwavering commitment to the profession. The episode has realistic military action sequences and touches upon emotional moments of soldiers in action.

Rising film star Mr. Hamza Khawaja plays the role of Major Shujaat. The actor was showered with accolades for his stunning performance in his debut film “Kamli” and proudly agreed to be part of this challenging project.

Brief testimonials of various personalities including Lieutenant General Faiz Hameed and the shaheed’s family, add much-needed perspective to the life and sacrifice of the officer.

The full episode has moments of gripping fight scenes that take the audience on a tour of soldiers’ lives in operational areas.

Based on a remarkable true story, where gallant son of soil Maj Abdul Kareem stands fast against the vicious siege of Ladha Fort, South Waziristan in 2008.
The terrorists always outnumber the soldiers at Ladha Fort and are able to organize on the surrounding ridges that overlook the fort. Despite paucity of supplies and ammunition, the fearless Maj Kareem and only 36 of his selfless under commands have marked one of the bloodiest engagements of the Pakistan Army against terrorists. It is a story of absolute valour, unrivaled will, and utmost faith that enables Maj Abdul Kareem to embrace the honor and pride of his motherland.

This film is a re-enactment of a brave fight of a tank crew led by Risaldar Muhammad Khan in Operation Sherdil undertaken in Bajaur Agency during the War On Terror (2008). The fight resulted in the shahadat of the complete tank crew but not before proving their mettle.

The story revolves around Risaldar Muhammad Khan, who was commanding a tank on 12 Sep 2008 along with Sowar Ahmed Nawaz (Gunner), Sowar Khalid Saifullah (Operator), and Sowar Muhammad Rasheed (Driver).

On a fateful day, unfortunately, two tanks of the tank troop couldn’t move due to some technical fault. Risaldaar Muhammad Khan (the troop leader) took the decision to continue moving for the collection of ammo/ spares. The tank, when left alone was completely surrounded by the terrorists, who were hiding along the ridge for an ambush. The tank came under intense fire but the crew kept the enemy at bay by showing extraordinary courage and determination.

The tank was badly hit and the driver embraced shahadat.  Later the other crew members also embraced martyrdom. Still undeterred, the tank commander did not surrender. He was martyred but not before fighting to the last bullet.

The film narrates the sequence of events as they happened. An effort has been made to showcase the high standards of professionalism, bravery, and devotion to the country under such stressful and vulnerable situations.  The film also shows how the crew members actively assisted and worked as a team. This is a story of courage, commitment, and bravery.

A story of bravery beyond compare, rooted in the spirit of sacrifice. A story of comradeship of men stirred to life in uniforms, chanting tales of fortitude and patriotism. Amidst the battle-ridden fields, three brothers in arms, Salman, Nadir & Jawad surpass their fears and carry on towards the rising sun. Determined to bleed and fight, not only for their motherland but for their friendship.

Havaldar Muhammad Wafa, a Pakistani field operator spy was given the mission of surveillance and intel gathering about the miscreants in district Washuk, Balochistan. The miscreants were heavily armed with hand grenades and Rocket Propelled Grenades. He operated undercover and gathered key intelligence which led to an operation against the “Fararis”.  Wafa was part of the leading ops team, he fought alongside Kallat Scouts at the forefront. Muhammad Wafa became the defender of his motherland Balochistan by leading the mission from the front. He didn’t only accurately indicate the whereabouts of miscreants’ hideout but lead the raid in the vanguard.

He got brutally injured during the fight but still managed to kill 3 miscreants. Muhammad Wafa eventually embraced shahadat fighting bravely. The operation turned out to be a phenomenal success as it resulted in the execution of a total of 15 miscreants and the commander of the Baluchistan Liberation Front, Khalid Hameed. The accomplishment was dedicated to Muhammad Wafa Shaheed and for his act of valor, gallantry & courage he was posthumously awarded the prestigious Sitara e Basalat.