A video clip of Kangana riding a fake horse that gallops on a trolley dug in the ground has gone viral on the social media. 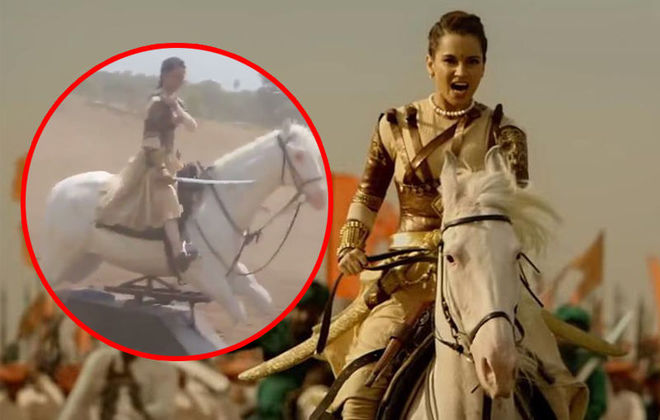 Kangana Ranaut’s Manikarnika: The Queen of Jhansi released amidst a lot of controversies. And the actress Kangana Ranaut always seems to be making the headlines for all the wrong reasons.

Lately being in news for her Bollywood film Manikarnika, the actress turned director Kangana Ranaut, is being trolled on social media yet again. This time the reason is a video clip from the shoot of the said film which is making rounds on social media.

The actress can be seen riding a mechanical horse which left social media users in fits as they mocked the actor for not being able to ride a horse. While the other warriors in the background are seen riding real horses.

The recently revealed video clip has left the Netizens in splits and they just couldn’t stop trolling the actress.

tweet
Share on FacebookShare on TwitterShare on PinterestShare on Reddit
Saman SiddiquiFebruary 22, 2019
the authorSaman Siddiqui
Saman Siddiqui, A freelance journalist with a Master’s Degree in Mass Communication and MS in Peace and Conflict Studies. Associated with the media industry since 2006. Experience in various capacities including Program Host, Researcher, News Producer, Documentary Making, Voice Over, Content Writing Copy Editing, and Blogging, and currently associated with OyeYeah since 2018, working as an Editor.
All posts bySaman Siddiqui