“The Irishman” is one of Netflix’s major Oscar hopefuls for this awards season. 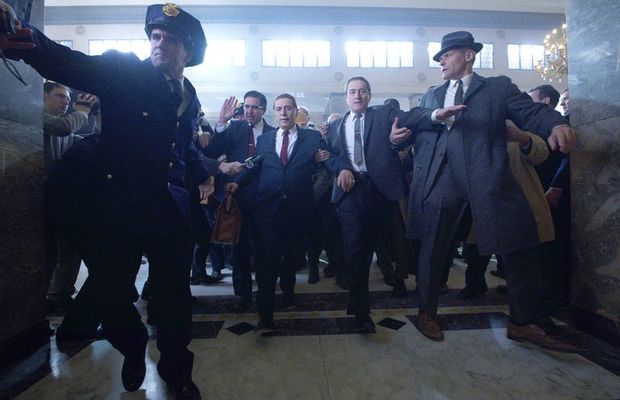 Netflix shares the first trailer of upcoming much anticipated film The Irishman, an American biographical crime film directed by Martin Scorsese and written by Steven Zaillian, based on the book I Heard You Paint Houses by Charles Brandt.

What makes this film so special is that for this dramatic crime thriller Scorsese has reunited with his former muse Robert De Niro and his “Goodfellas” Oscar winner Joe Pesci.

This gangster epic also stars Al Pacino, who has never worked with Scorsese previously, until now for The Irishman.

Robert De Niro plays the union official Frank ‘The Irishman’ Sheeran who gets in deep with the wrong people, leading up to the infamous disappearance of labor union leader Jimmy Hoffa played by Al Pacino set in 1975.

The supporting cast includes Harvey Keitel, Ray Romano, and Anna Paquin. All the major cast is featured to some extent in the teaser trailer, which spans decades as it tells Sheeran’s life story in the mob.

The full synopsis of The Irishman follows as: “Spanning decades, the film chronicles one of the greatest unsolved mysteries in American history, the disappearance of legendary union boss Jimmy Hoffa, and offers a monumental journey through the hidden corridors of organised crime: its inner workings, rivalries, and connections to mainstream politics.”

Seems like The Irishman is going to be its next massive hit, following the success of both Bird Box and Roma this past year. It is expected to be one of Netflix’s major Oscar hopefuls for this awards season.

“The Irishman” is slated for its world premiere as the opening night selection at the 2019 New York Film Festival.

The film will be released in selected theaters and on Netflix sometime this fall.