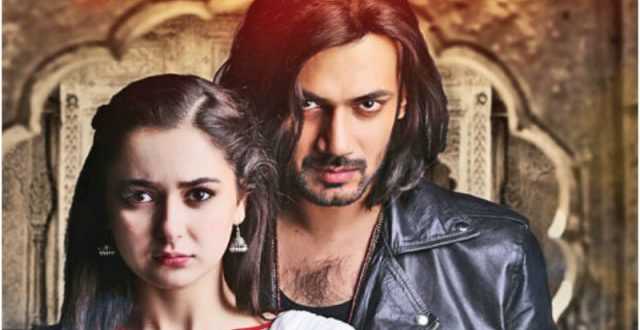 The sensational Hania Aamir has bagged her first ever major serial for ARY Digital. Starring alongside Zahid Ahmed. Directed by Ali Hassan and based on a script by Khuda aur Mohabbat fame Hashin Nadeem, Visaal is a Big Bang production and is all set to air soon only on ARY Digital.

Teasers for the drama have started doing rounds on the channel and from what we have seen so far, Visaal seems to be an intriguing story with Zahid Ahmed playing a conflicting yet intense character. According to sources, Hania Aamir plays Pari, an innocent girl, who knows when to speak up for what she thinks is right. She’s simple, she’s straightforward and courageous as well.

Besides Hania Aamir and Zahid Ahmed, Visaal will also star  Firdous Jamal, Saboor Aly and Waleed Zaidi in prominent roles. From the promos that we’ve looked at, Zahid Ahmed plays an intense character. Is he religious or is he street smart, or is he both? Only time will tell. However, the teasers do promise a very engaging story, something we’re looking forward too.

Zahid Ahmed plays Akku Akram, “It follows the story of my character Akku, aka Akram, who is a trickster and deceives people in disguise. It is a very colorful character who considers himself a hero.  Visaal is a complete family entertainer and carries an important lesson at the end,” said Zahid to one of the media publications.

The tentative date for Visaal happens to be 28th March says sources at ARY Digital. However, once a confirmed date has been decided, we’ll update you for sure! Stay tuned!

tweet
Share on FacebookShare on TwitterShare on PinterestShare on Reddit
Rameeza NasimMarch 17, 2018
the authorRameeza Nasim
Rameeza Nasim, a Paralian, passionate about poetry, drama and fiction. By giving drama critiques I feel like I am endorsing the writer's message to the audiences, I love my job. Being a critic responsibility lies on my shoulders to point out the flaws and shortcomings of the play be it on writer's , performers or director's end . I did my Masters in English Literature and Linguistics .
All posts byRameeza Nasim