IN ASSOCIATION WITH ' SEARCH FOR JUSTICE, PAKISTAN' 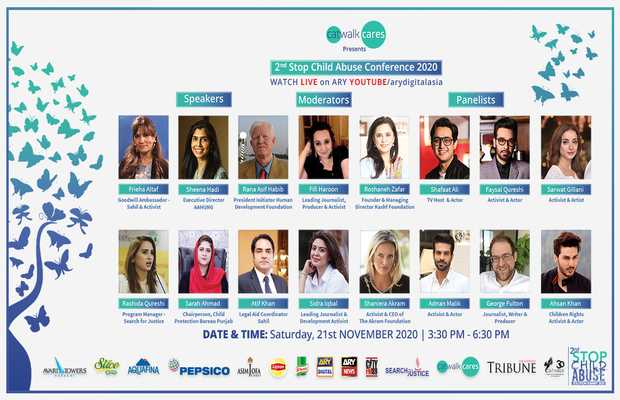 After the impactful ‘Stop Child Abuse Conference’ (Through Awareness and Commitment) conference Last year, Catwalk Event Management and Productions under the aegis of Catwalk Cares in collaboration with NGO ‘Search for Justice Pakistan” who work for the protection of children, will co-chair a solution-summit entitled “Child Sexual Abuse- The Way Forward” on Saturday, November 21, 2020, at Hotel Avari Towers, Karachi.

With ongoing incidents of almost a dozen child abuse cases bring reported daily in Pakistan, the all-important forum will bring together individuals from diverse spheres including Entertainment, Government, and Political Leadership as well as experts from academia and civil society to discuss proactive solutions to the systemic scourge of Child Sexual Abuse.

The well-demarcated sessions will ostensibly deal with the issue of child sexual abuse at three distinct levels: identifying its root cause; the role of the media in creating awareness and the recommendations of myriad experts that will be shared with Federal and Provincial Government(s) to ensure the implementation of laws to protect children from sexual abuse.

During Session One the key topic will be:  ‘Cruel Numbers – Statistical Data of Child Sexual Abuse Cases’ presented by Mr. Atif Khan the Legal Aid Coordinator from the NGO SAHIL. Session Two will cover the reasons ‘Why numbers are higher In Punjab than other provinces in Pakistan?” presented by Sarah Ahmad, Chairperson, Child Protection Welfare Bureau.

The Third Session moderated by leading journalist and development activist Sidra Iqbal is buoyed by the Polished Man Campaign introduced in Pakistan by philanthropist and activist Shaniera Akram: ‘How to Eradicate the Mindset from the Roots?’ This group discussion will comprise Shaniera Akram and ‘Polished Men’ ambassadors, actors/producers Adnan Malik and Shafaat Ali, and TV journalist/ producer George Fulton.

The remaining sessions will include the root causes of child sexual abuse; the efficacy of capital punishment to prevent child abuse and the protective measures that need to be implemented.

A Fourth Session offers  ‘Protective Measures What We Lack/ What We Have To Do’ presented by  Rana Asif Habib, President Initiator Human Development Foundation. Session Five presented by Sheena Hadi, Executive Director, Aahung will tackle ‘System Reforms’ that need to be implemented.

The Sixth Session will delve into ‘The Case for Castration & Whether Capital Punishment Works in Child Sexual Abuse Cases’ presented by conference co-host Frieha Altaf, CEO of Catwalk Cares and SAHIL ambassador.

The Seventh and final session will cast light on’ What role the Media has played or can play in creating awareness about child sexual abuse.’This segment will be moderated by Fifi Haroon, who has been a Senior Broadcast Journalist and Presenter for the BBC World Service who will also touch on how international and national media campaigns are helping highlight the issue of child abuse. The session includes a media panel comprising actors/activists Sarwat Gilani, Ahsan Khan and Faysal Qureshi some of whom have performed in serials with child abuse themes and are parents of young children.

The media panel might ostensibly discuss how ARY drama serials with child sexual abuse as their themes including ‘Haiwaan’, ‘Meri Guriya’, and ‘Roag’ have highlighted and impacted the cause.

Closing notes will be given by Mr. Iftikhar Mubarak Coordinator, Policy & Advocacy – Punjab / Plan Pakistan after which a high-tea and a networking session will ensue.

The ‘Child Sexual Abuse- the Way Forward” conference will be live-streamed on ARY YouTube Channel  during the course of the event.