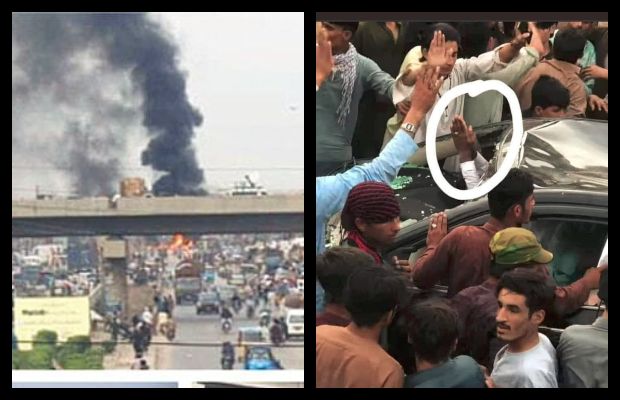 Metropolis saw ethnic tensions flare up after the killing of 35-year-old Bilal Kaka at a hotel in Hyderabad a week ago, as well in several districts of Sindh.

Thursday saw the most violent scenes at the Sohrab Goth.

Two people were shot dead, while two cars, two motorcycles, and a bus were torched by the violent mob.

Karachi’s Sohrab Goth area turned into a battleground as unidentified people created chaos for four hours in reaction to the Hyderabad incident and its aftermath.

Protestors torched tires to block the M-9 motorway and hurled stones were hurled at buses and the election office of PPP & JUI.

While the protestors demanded to arrest miscreants involved in forcefully shutting down Pashtun businesses across Sindh.

The scenes of Thursday’s chaos are being shared on social media.

They're taking out Sindhi families out of their cars at Sohrab Goth, pelting stones at them and snatching their belongings…#SohrabGoth pic.twitter.com/71vCpcArOv

Our Walnuts claim they are a peaceful nation but this is the reality…. 🙂
I am not in favor of my Sindhi's ! But i condemn this thing as well…. #JusticeForBilalKaka#پشتون_کوجینےدیں pic.twitter.com/F1gdsJoxJA

saddest visual on pakistani twitter today – a common citizen with his wife and kids surrounded by a mob at Sohrab Goth Karachi – begging for a safe exit – do we have a government to maintain law & order in the city ?? who's responsible for commoners safety & security ?? no one ?? pic.twitter.com/TA1uOtRhMb

Afghans marching with rifles and pistols in Sohrab Goth Karachi. Would anyone want such a people on their lands? pic.twitter.com/ZBUNOEu3iF

Situation out of control
Afghani's attacked the buses and public in buses at Sohrab Goth
Peoples are unsafe ! There is no LEAs, ARMY, Police yet. pic.twitter.com/kq1GZjyocW

tweet
Share on FacebookShare on TwitterShare on PinterestShare on Reddit
Saman SiddiquiJuly 15, 2022
the authorSaman Siddiqui
Saman Siddiqui, A freelance journalist with a Master’s Degree in Mass Communication and MS in Peace and Conflict Studies. Associated with the media industry since 2006. Experience in various capacities including Program Host, Researcher, News Producer, Documentary Making, Voice Over, Content Writing Copy Editing, and Blogging, and currently associated with OyeYeah since 2018, working as an Editor.
All posts bySaman Siddiqui