Abandoned restaurant at Do Darya Karachi fells into sea

Several people are reported to be injured in the accident 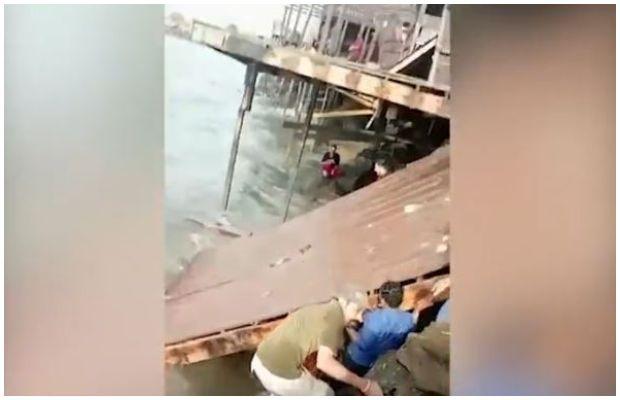 An abandoned restaurant at Do Darya Karachi fell into the sea on Monday morning.

As reported a portion of the abandoned restaurant named Zaiqa located at the famous DoDarya fell into the seawater.

The restaurant that was abandoned reportedly 12 years ago was in ruins because of no maintenance, while the recent rains had made the wooden structure weak.

While those who drowned in the water were immediately rescued.

The police reached the spot following the incident.

According to police, a restaurant on Do Darya namedZaiqa collapsed but there were no casualties.

The police rushed to the scene soon after receiving information about the incident on the 15 helplines.

According to the police, the restaurant had been closed for the last 12 years.

There are several popular restaurants located in the Do Darya strip in Defence Housing Authority (DHA) Phase VIII.

While this accident is a wake-up call to check the safety and maintenance of the existing structures at Do Darya as the recent rains could have caused damage to such wooden constructions.

The video of the accident has gone viral on social media thanks to TikTokers present at the spot!

tweet
Share on FacebookShare on TwitterShare on PinterestShare on Reddit
Saman SiddiquiAugust 1, 2022
the authorSaman Siddiqui
Saman Siddiqui, A freelance journalist with a Master’s Degree in Mass Communication and MS in Peace and Conflict Studies. Associated with the media industry since 2006. Experience in various capacities including Program Host, Researcher, News Producer, Documentary Making, Voice Over, Content Writing Copy Editing, and Blogging, and currently associated with OyeYeah since 2018, working as an Editor.
All posts bySaman Siddiqui