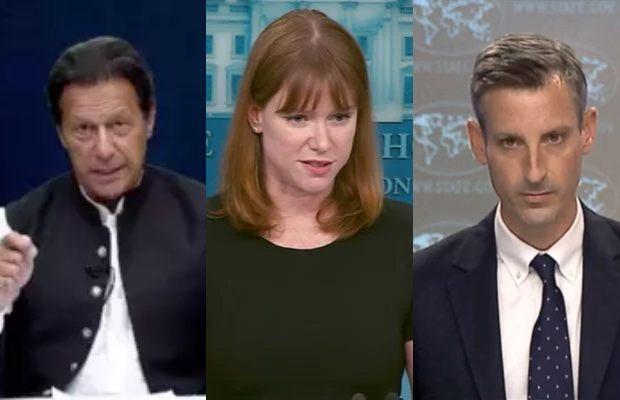 The US State Department and White House together rejected Prime Minister Imran Khan’s allegations he leveled blaming foreign powers responsible for attempting to topple his government.

US State Department categorically rejected any kind of involvement in the no-confidence motion against PM Imran Khan.

“Allegations of US involvement in the no-trust motion and ‘threat letter’ to PM Imran Khan are baseless,” said the State Department.

At the press briefing on early Friday, responding to a question that the Prime Minister of Pakistan accused the US government of working to remove him from power, Bedingfield said, “absolutely no truth to that allegation”.

On the other hand, US State Department Spokesperson Ned Price also rejected Imran Khan’s statement that the US government is trying to oust him.

During a regular press, briefing Price was asked to comment on PM Imran Khan’s allegation.

The US official said, “we are closely following developments in Pakistan, we respect and support Pakistan’s constitutional process and rule of law”.

“However, when it comes to that allegation, there is no truth to it,” he added.

PM Imran Khan in a televised address to the nation on Thursday, while referring to the “threatening memo” claimed to have received against his government from a foreign country, mistakenly named the United States to be behind the conspiracy.

At first, in what seems to be an apparent slip of the tongue, PM Imran Khan had named “the United States…” but quickly moved on and stated that “a foreign country” had sent a “threatening memo” that was against the Pakistani nation.

tweet
Share on FacebookShare on TwitterShare on PinterestShare on Reddit
Saman SiddiquiApril 1, 2022
the authorSaman Siddiqui
Saman Siddiqui, A freelance journalist with a Master’s Degree in Mass Communication and MS in Peace and Conflict Studies. Associated with the media industry since 2006. Experience in various capacities including Program Host, Researcher, News Producer, Documentary Making, Voice Over, Content Writing Copy Editing, and Blogging, and currently associated with OyeYeah since 2018, working as an Editor.
All posts bySaman Siddiqui