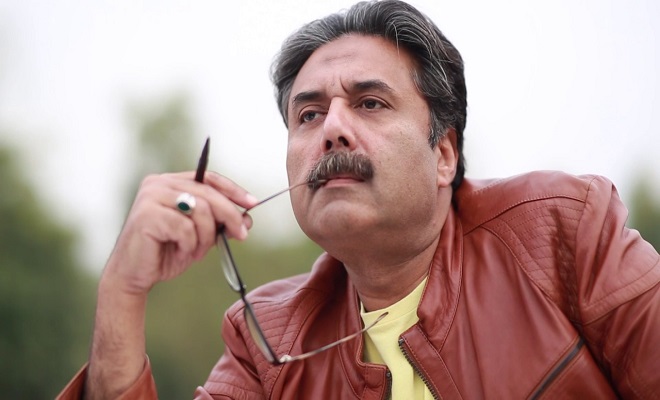 Utterly ridiculous and downright illogical remarks by television personalities isn’t a new occurrence for the audiences of Pakistani TV. Everyday other day a circus is played on national television channels and a ‘bandar does tamasha’ – nothing new there, nothing shocking either.

However, in this day and age of knowledge, and liberty, and the tools to educate a layman’s otherwise suffocated mind, it comes off as a tad bit of disappointment when seemingly educated individuals utilize the far reaching television medium to utter remarks that are insensitive, derogatory and have no logical explanation behind.

The latest version of sexism and ignorance came from ‘noted’ anchor person and columnist Aftab Iqbal who in his program Khabarzar passed remarks unfathomable by sane minds.

In his show Iqbal had setup a staged performance to shed light on fake faith healers commonly known as ‘peer baba’. The segment included case of a young woman who was portrayed as a patient of hysteria.

While talking about the women’s health issue, Aftab conveniently made a connection with her ‘unmarried’ status to her hysteria. Yep!

The ‘esteemed’ columnist deduced- on the basis of God knows what knowledge – that her hysteria is a result of her singlehood.

“31 and unmarried, and then you say she breaks things and acts up under hysteria. Kambakhto (his exact words) this career obsession is the reason you are doomed, because you are disturbing nature,” concluded Aftab Iqbal.

The staged brother of the hysteria patient mentioned that his sister is an IT expert and attends international conferences, and our ‘honored’ anchor person outright suggested him to get his sister wedded and leave all the conferences at once! This is ought to cure his sister.

Too much to comprehend?

Well if you continue to watch the show, you’ll see the next thing Aftab Iqbal was seen doing was calling a heavy man (an actor) “motey” as somebody would call himself Aftab. To top it all, other participants referred to him the same instead of his name, because hey naam mei kya rakha hai when you are a mota?

So basically in one episode Aftab Iqbal thrashed career oriented women, demeaned patients suffering from hysteria and to add a little humor fat shamed a man as every other day routine.

And this was more than enough of TV for us to digest in one day.