The PML-N leader was summoned to NAB’s Rawalpindi office today to record a statement in the ongoing investigation over the Narowal Sports Complex.. 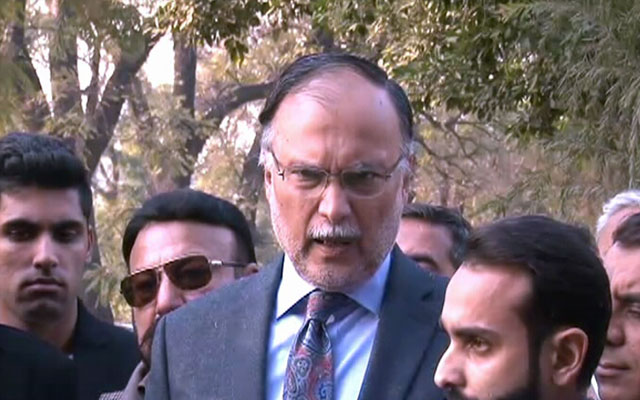 The PML-N leader was summoned to NAB’s Rawalpindi office today to record a statement in the ongoing investigation over the Narowal Sports Complex..

Iqbal, a former interior minister, was taken into custody over his alleged role in the misuse of federal funds causing losses worth billions to the national exchequer by initiating the Sports City project in Narowal – his home constituency.

A spokesperson for NAB said the Pakistan Sports Board also illegally used its authority for the construction of the sports city.

The NAB spokesperson further said that Iqbal would be presented before an accountability court on Tuesday for physical remand.

A statement issued by the bureau also said that a team of doctors had been summoned to conduct a medical assessment of Iqbal today to ensure his health was not at risk.

Prior to his arrest, Ahsan Iqbal had told media that he had already submitted the required documents related to his income and expenditures to NAB’s Rawalpindi branch.

The former interior minister said he had also responded to a detailed questionnaire given to him by the bureau in connection with the case.

According to sources, the former minister is accused of starting the Rs3 billion project illegally.

“We will not be scared,” says PMLN

She claimed that the probe into the case had already been shut in the past because NAB couldn’t find any evidence against the former minister.

Aurangzeb further said that the Prime Minister Imran Khan is mishandling his authority to target the PML-N and other opposition parties, adding that, “We will not be scared”.

She informed Iqbal underwent surgery three days ago in the Services Hospital and a plate was removed from his arm.

In May, 2018, Iqbal was shot and injured in Narowal during a corner meeting.