It turned out to be a scrapped airplane 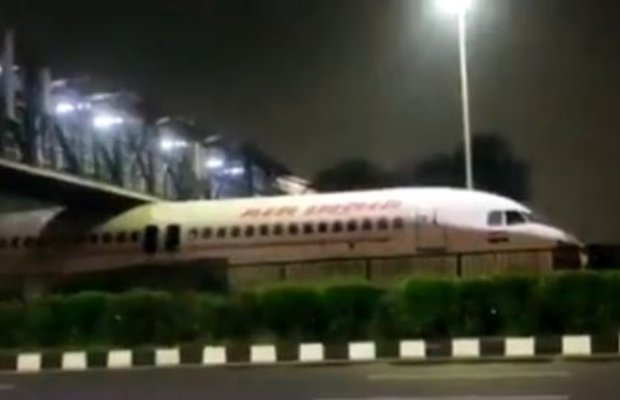 Seems in a bizarre sort of an event, an Air India aircraft was spotted getting stuck under a pedestrian bridge, near New Delhi airport.

A video clip showing the airplane stuck has gone viral on social media leaving many wondering what on earth was the aircraft was doing on the road.

It turned out to be a scrapped airplane, which did not have wings, was reportedly being transported when it got stuck on the Delhi-Gurugram highway.

However, in a statement that Air India clarified that the aircraft had been deregistered and sold off.

It was being transported by the buyer on Saturday night when it got stuck under the foot overbridge.

“This is a deregistered scrapped aircraft of Air India which has been sold off,” the statement read.

“This was transported last night by the party. Air India has got no connection whatsoever with the aircraft under any circumstances.”

ANI journalist Ashoke Raj shared the statement in a tweet.

#WATCH An @airindiain plane ✈️ (not in service) got stuck under foot over bridge. Can anyone confirm the date and location?
The competition starts now👇 pic.twitter.com/pukB0VmsW3

Later the Delhi airport official also confirmed to an Indian media outlet that the aircraft did not belong to the airport’s fleet.

“The aircraft certainly does not belong to the Delhi airport’s fleet and in the video, it is being transported without any wings. It appears to be a scrapped plane and the driver may have made a judgment of error while transporting it,” the official said.