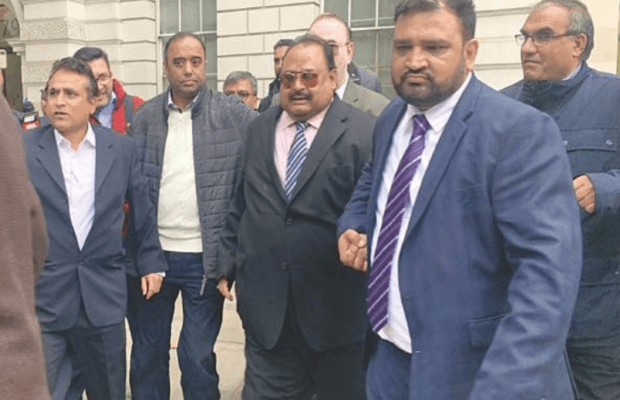 Muttahida Qaumi Movement (MQM) founder Altaf Hussain appears at the Central Criminal Court before the judge for the procedural hearing in the case that brought against him by Crown Prosecution Service’s Counter-Terrorism Division.

The case is related to the incitement speech made in August 2016 from London to Karachi.

Altaf Hussain, the self-exiled founder of MQM, will stand trial next year in the UK for a terrorism offence.

MQM founder arrived at the Old Bailey, accompanied by his colleagues from the MQM International Secretariat.

As he appeared on bail at the Old Bailey in London, speaking to confirm his name, date of birth, and nationality as British. His trial, with a time estimate of up to four weeks, was fixed for 1 June at the same court

Altaf Hussain, who requested asylum in the 1990s and later gained UK citizenship, has not yet been required to enter a plea.

It was learned last week that the MQM founder has been allowed to use social media to a limited extent and he has been also allowed to speak to his followers but on social terms only.

On October 11, Hussain was formally charged by the Crown Prosecution Service under Section 1(2) of the Terrorism Act 2006 for encouraging terrorism during a speech he made in August 2016.

If convicted, he could face a maximum prison sentence of 15 years along with a fine.

tweet
Share on FacebookShare on TwitterShare on PinterestShare on Reddit
Saman SiddiquiNovember 1, 2019
the authorSaman Siddiqui
Saman Siddiqui, A freelance journalist with a Master’s Degree in Mass Communication and MS in Peace and Conflict Studies. Associated with the media industry since 2006. Experience in various capacities including Program Host, Researcher, News Producer, Documentary Making, Voice Over, Content Writing Copy Editing, and Blogging, and currently associated with OyeYeah since 2018, working as an Editor.
All posts bySaman Siddiqui