Breaking: Fire erupts in the basement of a superstore at Jail Chowrangi, Karachi 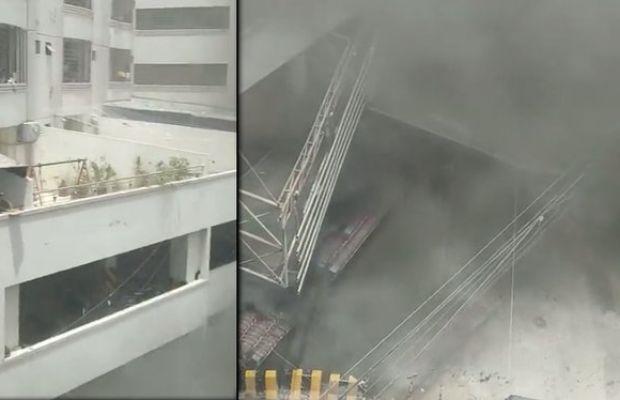 Fire erupts in the basement of a superstore at Jail Chowrangi, Karachi on Wednesday afternoon.

As reported, fire trucks from all over Karachi have been called in to take part in the firefighting operation.

The fire has been declared of the grade 3 category.

As reported, a fire broke out in the warehouse of a low-cost departmental store located opposite Karachi’s Central Jail, one of the busiest main roads of the city, on Wednesday morning.

According to the fire department, the fire broke out at 11:10 am and at least ten fire tenders were dispatched to the site.

As reported, the fire broke out in the warehouse of the superstore located in the residential building and spread to other places.

Goods worth lakhs of rupees were burnt to ashes by the fire.

According to rescue officials, the superstore is located on the ground and first floor of a 15-story residential building at Jail Chowrangi while the warehouse of the store is in the basement of the building.

However, the cause of the fire is yet to be ascertained.

Fire brigade officials said that two fire tenders were being used to put out the fire in the basement of the shop.

Rescue officials informed that all those inside the building and the supermarket have been evacuated, and no one has been injured or knocked unconscious.

Police, Rangers, and other law enforcement agencies, on the other hand, rushed to the spot and prevented the public from approaching the supermarket.