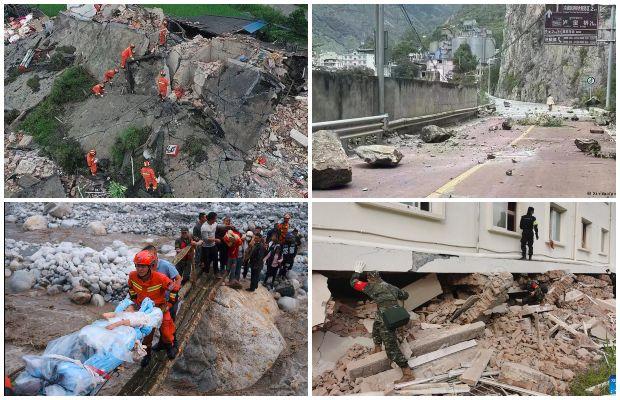 A 6.8-magnitude earthquake hit Sichuan on Sept.5, the strongest earthquake to hit the province since 2017.

Rescue efforts are currently underway in the earthquake-hit areas. The tremors triggered landslides and shook buildings in the provincial capital of Chengdu.

Nearly 250 people were being treated for injuries from the disaster, with dozens critically wounded, according to Chinese state media.

Rescuers are also working on retrieving over 200 people stranded in the quake zone, restoring telecommunications services and power and water utilities, as well as delivering food supply to residents affected by the magnitude-6.8 temblor, the state media reported.

As reported, the people in Sichuan Province received an earthquake warning from smartphones. As soon as the countdown on the screen ended everything started to shake. The earthquake occurred in Luding, Sichuan Province, according to official information.

After the Sichuan earthquake in 2008, China established a wide range of earthquake wave warning networks. On 5 Sep’s 6.8-magnitude earthquake, Chengdu residents got an early warning time of more than 30 seconds.

The scenes at the moment the earthquake hit, were captured by various means and are now being shared on social media revealing the intensity of the shock.

The people in Sicuan Province received an earthquake warning from smart phones today. As soon as the countdown on the screen ended everything started to shake. An #earthquake occurred in Luding, Sicuan Province, according to official information. #China pic.twitter.com/T9U4DlkIJX

A moving scene captured by cameras:
Teachers in Hanyuan County, SW China’s Sichuan rushed into the classroom and picked up children who were taking a nap while evacuating when a 6.8-magnitude earthquake hit the province on Sep 5.pic.twitter.com/h3gGBr1OY2

This afternoon, An earthquake of magnitude 6.8 occurred in Ganzi, Sichuan.🙏🙏🙏 pic.twitter.com/NYNzE7cmo1

The earthquake is the strongest to hit the #Sichuan region since 2017 – the provincial capital #Chengdu was shaken by the magnitude 6.8 quake. pic.twitter.com/QkBJsfGHvs

At 12: 52 this afternoon, when the 6.8-magnitude earthquake happened, Mother Panda quickly escaped from danger with her two children in Wolong, Sichuan.🐼🐼🐼 pic.twitter.com/JxQAYcWiz0

Rescue efforts are underway in the affected areas:

A man under rubble was successfully saved by the rescue team with team members' bare hands.

At least 30 people confirmed to be killed till now in the 6.8-magnitude earthquake in Luding County, Ganzi, Sichuan of China🙏🙏🙏#Ludingearthquake pic.twitter.com/tdRN8QUPUv

Firefighter rescuers built a bridge with logs and used homemade stretchers to carry the wounded crossing a river, after a 6.8-magnitude earthquake jolted Luding County in SW China's Sichuan Province on Sep 5.pic.twitter.com/jTNW4LKjsF

After a 6.8-magnitude earthquake hit Luding county in Southwestern China today, the People's Liberation Army (PLA) and the People's Armed Police Force (PAPF) arrived in the epicenter region and carried out rescue and relief operations. May everyone stay safe and secure! pic.twitter.com/ju158IGtSn